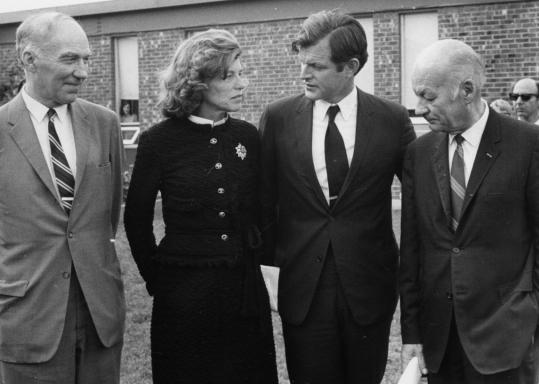 Dr. Raymond D. Adams (left) helped found the Eunice Kennedy Shriver Center on the grounds of the Fernald School in Waltham and was its first director. He attended a ceremony there with Shriver, Senator Edward M. Kennedy, and Dr. Malcolm J. Farrell. (Sam Hammat for the Boston Globe/file 1970)
By Bryan Marquard Globe Staff / October 26, 2008
Text size – +

Nearing the end of his long tenure as chief of neurology at Massachusetts General Hospital, Dr. Raymond D. Adams took time off and traveled to Switzerland. There, in a lakeside villa, he picked up a yellow writing pad and his fountain pen and wrote the first page of what would become his legendary textbook, "Adams and Victor's Principles of Neurology."

And then he wrote another page and another until he had a mountainous draft to give to his colleague and coauthor, Dr. Maurice Victor, who added his own insights.

"He wrote the entire book in longhand, one version that was 1,600 printed pages, and it all came from his personal experience," Dr. Allan Ropper, coauthor of recent editions of the book, said of Dr. Adams.

Chief of neurology at Mass. General for 26 years, Dr. Adams was still offering advice and editorial comments for the ninth edition of his widely-used book when he was in his mid-90s. He died Oct. 18 in Brigham and Women's Hospital of complications from congestive heart failure. Dr. Adams was 97 and had lived in the Chestnut Hill section of Brookline after many years in Milton.

"In American medicine he was viewed as really the consummate clinical neurologist," said Ropper, who is executive vice chairman of neurology at Brigham and Women's and also was the last chief resident to serve under Dr. Adams at Mass. General. "He had a longer and deeper influence on neurology than virtually anyone, but was very eager to share the credit with others. The modesty was quite something to behold."

Years later, he also helped found the Eunice Kennedy Shriver Center on the grounds of the Fernald School in Waltham and was its first director. Dr. Adams was the Bullard professor of neuropathology at Harvard Medical School, and retired in 1977 as chief of neurology at MGH.

His years as head of the department, beginning when he was 41, were a time of great change in the field.

"What Ray Adams did in essence was establish an American style of neurology and broke it away from the dominant European influence of the '20s, '30s, and '40s," Ropper said. "He carved out a much more modern perspective. What he did that really broke the field wide open is that he made maximum use of neuropathology to study diseases. He established neuropathology as the basic science of clinical neurology."

Under the leadership of Dr. Adams, Mass. General became "the place for neurology in the world," said Dr. J. Philip Kistler, director emeritus of the stroke unit at MGH. "It was the place that developed modern thinking about neurology."

The book, meanwhile, went on to reap acclaim from when it was first published in 1977. It "ranks first among textbooks in neurology," a review in the British medical journal The Lancet said of the seventh edition.

"Diving into a new edition of 'Adams and Victor's Principles of Neurology' is like meeting up with an old teacher after several years," began the review, which ended: "One can certainly live without this book, but medical life is far more pleasant with a copy within reach."

In addition to moving the field of neurology forward, Dr. Adams "was extremely loyal," Ropper said. "He was very, very attached to his trainees and looked out for their careers."

"He was intellectually, extraordinarily honest with himself and with others," Kistler said. "You wanted to emulate him and you wanted to strive for the best because of him."

Dr. Adams was born in Portland, Ore., and graduated from the University of Oregon, where he honed his skills as a competitive tennis player. Late into his 60s, he won matches against opponents decades his junior.

In part to impress the family of his girlfriend, Dr. Adams applied to medical school, according to his son-in-law Bud Dudley, a physician in Roanoke, Va.

Dr. Adams ended up at the Duke University School of Medicine and graduated in 1936, just six years after the school was founded. He went to Yale University on a fellowship to study psychology, but grew disenchanted, Dudley said, and moved to Boston. He had worked in the neuropathology laboratories at Boston City Hospital before he was picked to lead the neurology department at Mass. General.

At home in Milton, "he had a carved table, probably eight feet wide and long," said his son, Bill of Chicago. "It was an open table, rather than an ordinary desk, and he sat there writing hour by hour. Behind him was a bay window and he sat on the window seat. He always used a fountain pen, never erased. That mind was obviously a significant one, not only to hold the knowledge, but to modify as he went along."

Dr. Adams's first marriage, to Margaret Elinor Clark, a romance languages scholar, ended in divorce after 33 years. He then married Dr. Maria Salam-Adams, a pediatric neurologist at MGH, who died in 1991.

Though generally reserved, Dr. Adams was very good at telling jokes, said his stepdaughter, Nina Salam of Brookline, and they "would sound all the more funny coming from him, because he was so serious."

"And he loved his dark chocolates, but he was a man of strict habits, even in fun things," she said. "He'd have his cocktail in the evening and have one dark chocolate at the end of the meal. While it was a pleasurable event, there may have been some medicinal reasons, too, from relaxing the arteries with the cocktail to having the dark chocolate, which also could be beneficial."