Roger B. Linscott, acclaimed editorial writer for the Berkshire Eagle; at 88 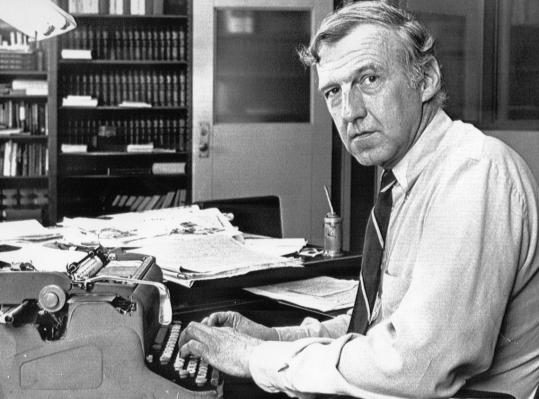 Roger B. Linscott wrote thousands of editorials over three decades at the Berkshire Eagle, winning a Pulitzer Prize for his commentary on President Nixon and the Vietnam War.
By Bryan Marquard Globe Staff / September 28, 2008
Text size – +

Consider these words Roger B. Linscott wrote in an editorial about an unpopular president:

"The damage that so deeply disturbs us is moral more than physical, an atmosphere of corruption that seems increasingly pervasive in our national life."

Or reflect for a moment on Mr. Linscott's editorial view of a military conflict gone awry in a distant land:

"So now we are back in the business of trying to bomb back into the Stone Age a tiny country which in no way threatens us, in lunatic pursuit of an 'honorable' end to a war which the President cannot bring himself to acknowledge was dishonorable to begin with."

The president was Richard M. Nixon, the war was in Vietnam, and Mr. Linscott - writing as much for the ages as he was for the moment - won a Pulitzer Prize in 1973 for these two and eight other editorials that appeared in the Berkshire Eagle.

Mr. Linscott, who for three decades used the forum of an editorial page to keep watch over civic affairs from Pittsfield to Washington, D.C., and beyond, died of pneumonia last Monday in the Kimball Farms Nursing Care Center in Lenox. He was 88 and had lived for many years in Richmond.

As prolific as he was opinionated, Mr. Linscott estimated that he wrote more than 400 editorials a year from 1954 until he retired in 1986, pounding out on a typewriter in excess of 12,000 during his tenure. Nonetheless, writing could be a struggle when he turned his eye on himself, as he noted in the 25th anniversary report of his Harvard class.

"To one who has produced for publication something in the vicinity of five million words during two decades of newspapering, a few hundred words of autobiography should come easily," he wrote in 1966. "It doesn't; in part, I suspect, because of a feeling that a report on twenty-five years of one's life should be laced with high adventure and revealed wisdom. Modesty, not to mention respect for facts, excludes both these elements."

Roger Bourne Linscott grew up in Winchester and Stoneham. His father, Robert N. Linscott, was a book editor who worked with such writers as William Faulkner, and his brother, Seymour, became a reporter and rewrite man for the Globe.

Mr. Linscott went to Phillips Exeter Academy in New Hampshire and then to Harvard, from which he graduated in 1941. A musician, he wrote that he played piano "with considerably more zeal than competence." He also held his own on the string bass, an instrument that took a solo journey in a story he used to illustrate his absent-mindedness.

"In his college days, he was on the way to his one and only recording date and left a rented bass fiddle in the taxi cab," Wendy Linscott of South Egremont said, recalling her father's oft-told tale. To fulfill his obligation, she said, he played a bass that was in the studio, but he "lived in fear for weeks afterward that the rental company would catch up with him and demand that he return the instrument he was never able to find."

The rental company never asked for the bass, his daughter said.

Habitually forgetful in decades to come, Mr. Linscott went on to lose and find and lose again a series of tan London Fog raincoats he liked to wear in all weather, including clear sunny days.

During World War II he was a Navy lieutenant stationed in the Pacific, and then he worked briefly in advertising in New York City. Mr. Linscott's newspaper career started at the Herald Tribune in New York, where he wrote a Sunday books column for two years and served, he wrote, "as a third-string reviewer."

He had married Lucy Ann Richardson Goodlatte in 1943 and "with the advent of offspring we considered life in the suburbs and decided instead to indulge a mutual taste for country living," Mr. Linscott wrote in his class report. His wife died in 1996.

A few weeks of perusing out-of-town papers at a Times Square newsstand led him to choose the Berkshire Eagle as his new professional home.

Beginning as a City Hall reporter in 1948, Mr. Linscott settled in and stayed for 38 years. He began penning opinions in 1956 and was named associate editor in 1972, the year he wrote the editorials that were awarded a Pulitzer Prize.

"Linscott used the Eagle editorial page to keep Berkshire County from being overrun by development, to keep state government on the straight and narrow, and to fight the worst excesses of the Nixon and Reagan administrations," Donald MacGillis, an editorial writer and assistant editorial page editor at the Globe, wrote of his former colleague, with whom he worked at the Berkshire Eagle for a dozen years in the 1970s and '80s. "When a misguided official was the target of an Eagle editorial, Linscott did not mince words. He put his crustiness to good use. Berkshire County is the better for it."

Said his daughter: "I never heard him talk about anything else he wanted to do but write. He liked editorial writing particularly because he was very opinionated, and there was no question that he liked being a big fish in a small pond and having an impact."

When Mr. Linscott was in his 70s, he was still putting in full weeks at the office, having taken a top editing job at Laurin Publishing in Pittsfield after retiring from the Eagle in 1986. But he had lost none of the acerbic flair that made his editorials memorable.

"I continue to work a fifty-hour week editing trade magazines - partly as a consequence of observing the premature senility of many friends who have chosen retirement instead," he wrote for his 55th Harvard class report a dozen years ago. "My avocations are mountain-climbing, piano-playing, drinking, book-collecting, and working for candidates who oppose the Republican lunatic fringe in Congress."

In addition to his daughter Wendy, Mr. Linscott leaves three other daughters, Judith of Lakeville, Conn., Victoria of Falls Village, Conn., and Rebecca of Sandisfield; and four granddaughters.

A memorial service will be announced. Burial will be private.