Martin Tytell, at 94; was wizard of the typewriter 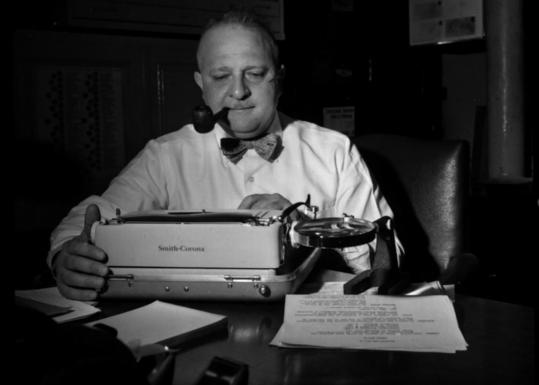 NEW YORK - Martin Tytell, whose unmatched knowledge of typewriters was a boon to American spies during World War II, a tool for the defense lawyers for Alger Hiss, and a necessity for literary luminaries and perhaps tens of thousands of everyday scriveners who asked him to keep their Royals, Underwoods, Olivettis (and their computer-resistant pride) intact, died Thursday in the Bronx. He was 94.

The cause was cancer, said his wife of 65 years, Pearl. She said that her husband also had Alzheimer's disease.

When he retired in 2000, Mr. Tytell had practiced his recently vanishing craft for 70 years. For most of that time, he rented, repaired, rebuilt, reconfigured, and restored typewriters in a second-floor shop at 116 Fulton St. in Lower Manhattan, where a sign advertised "Psychoanalysis for Your Typewriter."

There, at the Tytell Typewriter Co., he often worked seven days a week wearing a white lab coat and a bow tie, catering to customers such as the writers Dorothy Parker and Richard Condon, the newsmen David Brinkley and Harrison Salisbury, and the political opponents Dwight D. Eisenhower and Adlai E. Stevenson. Letters addressed only to "Mr. Typewriter, New York" arrived there, too.

Mr. Tytell worked on typewriters that could reproduce dozens of different alphabets appropriate for as many as 145 different languages and dialects - including Farsi and Serbo-Croatian, Thai and Korean, Coptic and Sanskrit, and ancient and modern Greek. He often said that he kept 2 million typefaces in stock.

He made a hieroglyphics typewriter for a museum curator, and typewriters with musical notes for musicians. He adapted keyboards for amputees and other wounded veterans. He invented a reverse-carriage device that enabled him to work in right-to-left languages such as Arabic and Hebrew. An error he made on a Burmese typewriter, inserting a character upside down, became a standard, even in Burma.

Martin Kenneth Tytell was the next-to-last of 10 children whose Russian Jewish immigrant parents lived on the Lower East Side of Manhattan. Eventually, going to school mostly at night, he earned a bachelor's degree from St. John's University and an MBA from New York University.

But as a boy he worked in a hardware store, carrying a screwdriver everywhere, and one day in school he was excused from gym class after volunteering to answer the telephone in a nearby office. Sitting on a desk was an Underwood typewriter, which he took apart. The man who came to fix it gave him his first lesson in typewriter repair. Before he was out of high school he had the typewriter-maintenance account for Columbia-Presbyterian Hospital.

In 1943, a contraband shipment that included 100 Thai typewriters was seized by the federal government, and with typewriters needed by overseas forces and typewriter producers having largely converted to other wartime manufacturing, Mr. Tytell, then in the Army, was asked to convert the Thai typewriters for the Office of Strategic Services, the World War II precursor to the CIA. His machines, capable of reproducing 17 different languages, were airdropped to OSS headquarters at various war fronts.

In 1950, lawyers for Alger Hiss, the former State Department official who had been convicted of lying to a grand jury about passing secret information to a communist agent, Whittaker Chambers, hired Mr. Tytell to prove that unlike a fingerprint, a typewriter's writing pattern is reproducible.

Hiss had been convicted largely because the government presented expert testimony maintaining that the documents passed to Chambers were written on a typewriter owned by Hiss and his wife, Priscilla. At his sentencing, Hiss famously accused Chambers of committing "forgery by typewriter."

Afterward, to prepare for an appeal, Hiss's lawyers hired Mr. Tytell to build a typewriter whose print pattern would be indistinguishable, flaws and all, from that of the Hisses. It took him nearly two years, but he succeeded. His work became the foundation of Hiss's plea, ultimately unsuccessful, for a new trial and, after his release from prison in 1954, of the debate over his guilt, which goes on to this day. Hiss died in 1996.

In addition to his wife, Mr. Tytell leaves a daughter, Pamela, of Paris, and a son, Peter, of Manhattan. Peter Tytell, who closed the store about a year after his father retired, is a forensic document examiner who frequently testifies in criminal trials, a natural offshoot of the family business.

Pearl Tytell said Thursday that she had met her husband in 1938 when he went to an office she was managing and sold her a typewriter.

Mr. Tytell was proud of the rarity of his expertise and relished the eccentric nature of his business. "We don't get normal people here," he said of his shop. And he was aware that his connection to the typewriter bordered on love.

"I'm 83 years old, and I just signed a 10-year lease on this office; I'm an optimist, obviously," Mr. Tytell told the writer Ian Frazier in a 1997 article in The Atlantic Monthly, commenting on the likelihood that typewriters weren't going to last in the world much longer. "I hope they do survive - manual typewriters are where my heart is. They're what keep me alive."