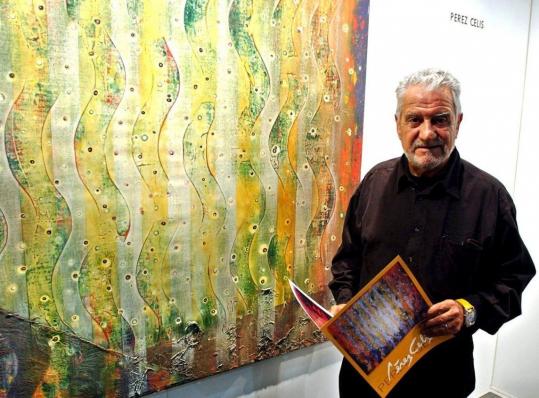 Pérez Celis posed in 2003 next to his painting ''Constellations'' at a contemporary art exhibit in Buenos Aires. Although widely known for his abstract pieces, he declined to be identified with any prevailing fashions or trends in the art world. ''Any style is a prison,'' he often said. (LEO LA VALLE/EPA)
Email|Print|Single Page| Text size – + By Adam Bernstein Washington Post / August 7, 2008

Mr. Celis burst to prominence by the early 1960s and became a prolific exhibitor in galleries and museums from Buenos Aires to New York. Although widely known for his abstract pieces, he declined to be identified with any prevailing fashions or trends in the art world. "Any style is a prison," he often said.

During the rise of pop art in the early 1960s - exemplified by Andy Warhol, Jasper Johns, and Robert Rauschenberg - Mr. Celis immersed himself in the indigenous art tradition of Argentina and Peru. In later years, he turned to more figurative designs from his studio in Miami.

Besides his skillful use of light and shadow, Mr. Celis's work resonated with many observers for its assertive, often juxtaposed geometric lines. He said such bold features were inspired by extended visits to the horizontal plains of the Argentine pampas and later to Caracas, Paris, and New York, cities where the vertical skylines dominated the horizon.

Some critics and artists could be less than enthusiastic about Mr. Celis's art, a view often chalked up to jealousy of his popular success. He had more than 120 solo shows during his career, and his art was purchased for many private collections and first-rate museums, including the Museum of Modern Art in New York. He received commissions from governments and businesses, which displayed his art prominently.

A huge fan of the Boca Junior soccer team, he created two enormous murals in 1997 for the team's La Bombonera stadium in Buenos Aires: "Idolos" (Idols) and "Mito y Destino" (Myth and Destiny), both Venetian mosaics and bronze on cement.

But his tendency to explore cultures and styles throughout his career also is what makes him intriguing and important, Martinez added.

"The geometrical and informal work of the beginning of the '60s is surprisingly fresh," he said. "The series of the '70s, which can be called 'Indo-American' and took elements of those cultures, were the ones that placed him as a great Latin-American artist."

A police officer's son, he was born Celis Pérez in the San Telmo neighborhood of Buenos Aires and reversed his name when he became a professional painter, after attending a fine arts high school.

At 17, he received his first major exhibition, at Galeria La Fantasma in Buenos Aires. He was welcomed into artist colonies in Buenos Aires and Montevideo while working as a carpenter's apprentice and advertising company illustrator.

He benefited from the early patronage of Guido Di Tella, an industrialist's son who turned his family's arts foundation in Buenos Aires into a major center for contemporary artists. Di Tella later became Argentina's foreign affairs minister and ambassador to the United States.

His first wife, Sara Fernandez, died in a car crash in 1975, and Mr. Celis spent months recovering from injuries he incurred in the accident. His second wife, Iris Laconich, died in 1999.

He leaves his third wife, Tamara Toma of Buenos Aires; and two children Sergio Perez Fernandez and actress Maria Jose Gabin. His daughter wrote a biography of her father.