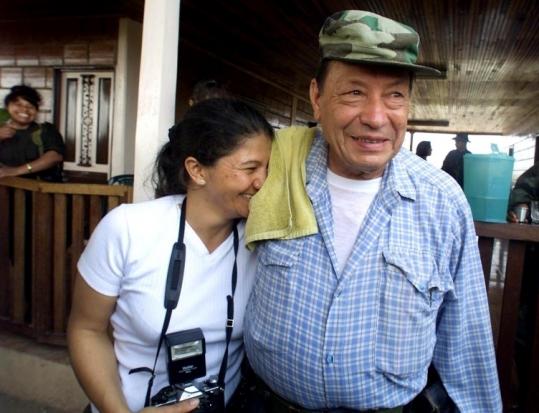 BOGOTA - Pedro Antonio Marín, the hard-bitten Colombian peasant who oversaw the rise to power of South America's largest rebel group, as well as its recent disintegration, has died, according to a fellow rebel. He was thought to be 77.

The Colombian government, which said it had launched bombing raids in the area where Mr. Marín was believed to be camped around the time he died, wants to conduct an autopsy. Mr. Marín's body has not been recovered.

Under the twin banners of land reform and social justice, Mr. Marín, who went by the aliases Manuel Marulanda and Sureshot, built the Revolutionary Armed Forces of Colombia, or FARC in Spanish, to a force that a few years ago numbered nearly 20,000. The FARC seemed on the verge of assaulting the capital.

But strategic decisions that Mr. Marín made in the 1980s to finance the FARC's goal of taking power through drug trafficking, kidnapping, and terrorism, worked to reduce the popular support on which the leftist rebel group's success depended.

In recent months, FARC leadership has suffered several killings, captures, and surrenders, and its ranks have been sharply reduced by desertions. Colombia's armed forces, which have benefited from billions of dollars' worth of US equipment and training, have "seized the initiative," analyst Antonio Caballero wrote in Semana magazine Monday.

Born into a peasant family in coffee-growing Quindio state, Mr. Marín left school after the fifth grade to work as a farm hand. He was radicalized forever by "La Violencia," the social upheaval of the late 1940s that left several family members dead and the town he lived in, Ceilan, burned to the ground.

He told his biographer, Arturo Alape, of witnessing massacres and seeing "10 or 15 bodies floating daily down the Cauca River."

Mr. Marín joined a Liberal Party self-defense group in the early 1950s, which operated like a small guerrilla group, and immediately displayed leadership qualities. He took the alias Manuel Marulanda.

Although the FARC later adopted a communist ideology and hierarchy, Mr. Marín's initial aim was to protect his family and other peasants from marauding Conservative Party gangs.

"We didn't call ourselves guerrillas; we didn't know what a guerrilla was," Mr. Marín told Alape for his 1989 biography.

But Mr. Marín moved leftward after meeting ideologue Jacobo Arenas in the 1950s, when he is also thought to have received military training from communist trainers. Around that time, Mr. Marín was nicknamed Sureshot for his prowess with a rifle.

Formed by Mr. Marín with 48 other fighters in 1964, the FARC slowly gained influence in remote mountain and farm areas by performing judicial and police functions that the weak Colombian state had abdicated, said political economist Jaime Zuluaga.

For his own part, Mr. Marín stayed in the shadows during his 44 years as leader, rarely giving interviews and emerging only during the abortive peace negotiations with Andrés Pastrana, former president, from 1999 to 2002.

Although the FARC never took on the broad appeal of the popular revolutionary movements in China, Cuba, or Vietnam, its message resonated in the cities and universities where in the late 1990s it could count on thousands of milicianos, or urban guerrillas, to keep it informed and supplied.

But at a critical 1982 leadership meeting, Mr. Marín and the FARC secretariat made a fateful decision to change its goal from attaining popular support to military control of Colombia, authorizing kidnappings to raise funds.

Later that decade, the rebels shifted from forcing drug traffickers to pay transit taxes to taking over the trafficking business themselves.