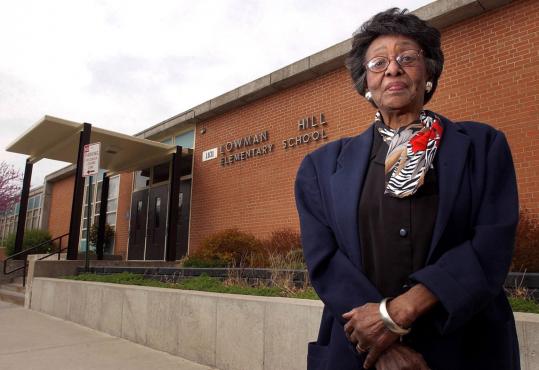 In 2004 Zelma Henderson visited Topeka's Lowman Hill Elementary School, where her children attended after the 1954 ruling. "I wanted my children to know all races like I did," she said. (Anthony S. Bush/topeka capital journal)
Email|Print|Single Page| Text size – + By Associated Press / May 22, 2008

TOPEKA, Kan. - The last surviving plaintiff in Topeka's Brown v. Board of Education case, which led to the historic 1954 Supreme Court ruling outlawing segregation in public schools, has died at 88.

Her son, Donald, said she wasn't physically imposing, but when she was passionate about something, "She was just fire."

In 1950, Ms. Henderson signed onto the litigation on behalf of her children challenging Topeka's segregated schools. In all, 13 black parents in Topeka, including the Rev. Oliver Brown, took part in the federal case.

The plaintiffs lost in US District Court, but the case was appealed to the US Supreme Court, and consolidated with similar cases from Virginia, South Carolina, and Delaware.

Her children were forced to attend a school that was 10 blocks farther away from their home than a whites-only school.

"I wanted my children to know all races like I did," Ms. Henderson said in a 2004 interview. "It means a lot to a person's outlook on life. No inferiority complex at all, that's what I wanted for my children as far as race was concerned."

The Brown v. Board National Historic Site is now operated by the National Park Service in a formerly segregated school building.

"Her passing is a rather large milestone in the history of the case and that period of our history," said Dennis Vasquez, superintendent of the historic site. "It puts it in more of a historical perspective because there are no longer any living plaintiffs in the Topeka case."

He said Ms. Henderson was actively involved with the historic site, including appearing in an interactive video for visitors. The site opened May 17, 2004, the 50th anniversary of the Brown decision, and President Bush spoke at the dedication ceremony.

While Ms. Henderson was the last surviving Topeka plaintiff, there still are some plaintiffs from the other state cases consolidated with Brown.

The Supreme Court also upheld a related challenge involving segregation in the District of Columbia the same day Brown was decided.