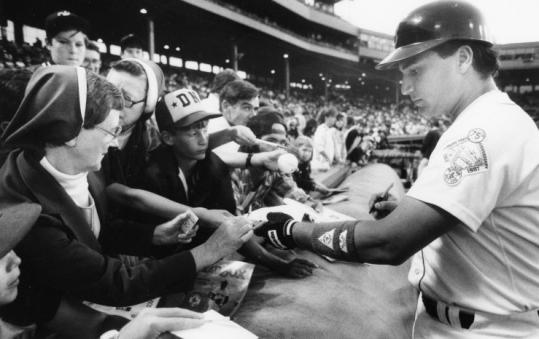 NEW YORK - John Marzano, a former catcher for the Boston Red Sox who became an online baseball analyst for MLB.com, died on Saturday at his home in Philadelphia. He was 45.

Matt Gould, a spokesman for the website, said Mr. Marzano had fallen down a flight of stairs, but that the precise cause of death had not been determined.

Although Mr. Marzano was never a star player, he always exhibited a boisterous penchant for getting on camera, a precursor to his off-the-field career on MLB.com's video stream.

Ellis Burks, a teammate on the Red Sox and a close friend of Mr. Marzano's, said: "He was always cracking jokes, always a prankster. Every time someone would hit a home run or Roger Clemens would strike out the side, Mr. Marzano would go sit right beside that player and say he wanted to get some TV time, too."

The Red Sox were not the first major league team to draft Mr. Marzano. In 1981, just out of high school, He was picked by the Minnesota Twins in the third round. But he chose to go to college.

While at Temple University, he earned a spot on the 1984 US Olympic team. Although baseball was still an Olympic demonstration sport at the time, that '84 team included the future major league stars Mark McGwire, Barry Larkin, and Will Clark.

He appeared in two games for the Rangers in 1995. The next season, he earned a spot on Lou Piniella's Seattle roster, the first of three seasons with the Mariners.

After retiring, Mr. Marzano worked as a postgame analyst of Philadelphia Phillies games before joining MLB.com's video network as a cohost of "Leading Off," with Vinny Micucci, in 2007.

John Robert Marzano was born in Philadelphia - "South Philly" he would have insisted, with an accent indicative of that part of town. He leaves his mother, Laura; his wife, Terri; two daughters, Dominique and Danielle; and two grandchildren. A funeral Mass will be said Friday morning in Philadelphia.