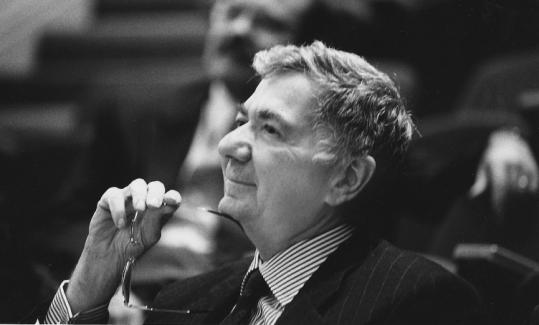 New England Medical Center was financially troubled in 1979 and in need of a charismatic leader when hospital officials interviewed Dr. Jerome H. Grossman, who dazzled them with his intellect and confidence.

"It was like this flash of energy arrived in the room," Philip Burling, a lawyer who has served on the hospital's board, told the Globe in 1995 as he recalled that meeting. "It didn't take more than about two days before it was absolutely clear he was the one we wanted."

With a forceful vigor that made him a key player in Boston's medical community, Dr. Grossman led the medical center for 16 years and spent the past decade at the Harvard Kennedy School, delving into the ills of the national healthcare industry.

Dr. Grossman died of cancer April 1 at his home in the Back Bay. He was 68 and had cowritten a forthcoming book, "An Innovative Prescription," that will now be a valedictory of sorts for his 42-year career in Boston as a physician, administrator, and thinker.

Through the decades, each day's tasks included a range of activities, from seeing patients to attending board meetings to teaching medical school classes, but Dr. Grossman's principal currency was ideas.

"He had more ideas and a clearer thought process than anyone else I ever encountered," said Dr. Gordon Vineyard, a friend and former surgeon at Brigham and Women's Hospital who also has served as interim chief executive of Harvard Vanguard Medical Associates. "The ideas came out so fast. Sometimes you'd like to go to the water fountain and have a sip. This was a fire hose."

A senior fellow at the Harvard Kennedy School and director of its Health Care Delivery Policy Program, Dr. Grossman was as much a part of the national debate over the future of medicine as he was a scholar of the local scene. He had chaired committees for the Institute of Medicine of the National Academy of Sciences and led the academy's president's circle for two years.

"Jerry was one of the best people for understanding healthcare, both as a practitioner and as an analyst," said Joseph Nye, former dean of the Harvard Kennedy School and a university distinguished service professor at Harvard. "When he would come to a seminar, he always would ask the right questions, always had very thoughtful answers of his own. And along with his keen intellect, he had a nice personal touch, a sense of enjoyment in life, and a spark of humor."

Christensen said his colleague "reached all the way into upper echelons of the greatest in his industry in his generation. He was the real bridge between the healthcare industry, the government regulators and policy makers, and the academic community, and he played that role better than anyone I've known."

Dr. Grossman grew up in Maplewood, N.J., graduated from the Massachusetts Institute of Technology with a bachelor's degree in 1961 and from the University of Pennsylvania School of Medicine in 1965.

Moving to Boston in 1966, he worked at Massachusetts General Hospital and rose to be director of ambulatory care before taking the reins of New England Medical Center, now called Tufts Medical Center.

With forward-looking optimism, he resuscitated the medical center's fortunes, sometimes referring to himself as "Norman Vincent Grossman" - a nod to Norman Vincent Peale, author of "The Power of Positive Thinking."

In the process, he became the highest-paid hospital chief in Boston, his salary and benefits rising to $664,000 in 1993. He also helped found Transition Systems Inc., a healthcare information company that colleagues called visionary in pushing the medical field toward electronic record-keeping.

Dr. Grossman took a voluntary pay cut in 1994 as rapid changes in healthcare began to batter anew the finances of New England Medical Center, which had accumulated sizable debt and failed to secure a much-needed merger in 1995 with Pathways Health Network.

"I'm very tired," Dr. Grossman told reporters in September 1995 when he announced he would step down from his leadership post. "Someone asked, 'Why is this the moment?' It was Labor Day and I was ganged up on by my wife and three daughters."

More than engaging in whimsy, Dr. Grossman was acknowledging the role family played in his life.

"He put family first in every way," said his daughter Kate Sutliff of Newton. "Everyone basked in the glow of my dad, and he was always, always there."

She said that despite the pressures of running a medical center, teaching at Tufts University School of Medicine, and serving on numerous boards, he was ever available to her and his other daughters, Elizabeth and Amelia, who both live in Washington, D.C.

In January 1968, Dr. Grossman married Barbara N. Lieb, who became his intellectual confidante and political sparring partner. Their daughters noted that when the Grossmans first met, Barbara was a Democrat and their father a Republican, though the two moved closer ideologically through the years.

"She said, 'I cherish every last moment of our 40 years together. It was such a gift,' " Sutliff said of her mother.

Though her father had been ill, Sutliff said, his energy and optimism were such that he kept living as if time might unfold endlessly.

"He lived so in the moment," Sutliff said. "He went after everything. Anything he was interested in, he went after. He didn't wait for it to come to him. He may be gone too early, but there are no regrets. Nothing was left unsaid. He adored us and we knew it, and we adored him and he knew that, too."

In addition to his wife and three daughters, Dr. Grossman leaves a brother, Sy of Berkeley, Calif.

A memorial service will be held at 2:30 p.m. Friday in Trinity Church in Boston.