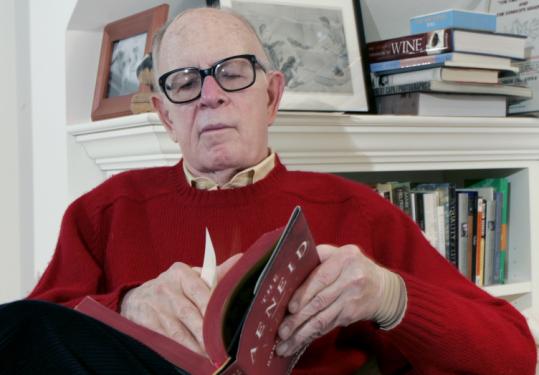 Robert Fagles, with a copy of his translation of Virgil's "The Aeneid." Professor Fagles had taught at Princeton University. (ap/file 2006)
Email|Print|Single Page| Text size – + By Matt Schudel Washington Post / April 2, 2008

WASHINGTON - Robert Fagles, a Princeton University professor whose translations of the three great epics of the classical world, "The Iliad," "The Odyssey," and "The Aeneid," have been recognized as enduring literary works in their own right, died March 26 of prostate cancer at his home in Princeton, N.J. He was 74.

Dr. Fagles was one of the few scholars to translate all three epic poems, which are considered the fountainhead of Western literature. His translations, written in clear, simple English that retained the dignity of the Greek and Latin originals, became unexpected best-sellers.

His translations of "The Iliad" and "The Odyssey" came out in 1990 and 1996, respectively. He then brushed up on his Latin for his translation of Virgil's "Aeneid," published in 2006. His versions of the three epics have sold about 4 million copies worldwide and have become established as the definitive translations of our time.

Each new translation was greeted with more encomiums than the previous. In 1996, critic Paul Gray cited "the Fagles phenomenon" in Time magazine. In his 2006 review of the "Aeneid" translation in the Los Angeles Times, historian Thomas Cahill wrote: "It is magnificent. When you are faced with something incredibly complex yet beautifully simple, you must bow your head before inexplicable greatness. That's the case with Robert Fagles' translation."

The classic poems have been reinterpreted hundreds of times over the centuries, as each generation has found fresh meaning in the tales of the Trojan wars ("The Iliad"), Odysseus's struggles to return home from war ("The Odyssey") and the founding of Rome ("The Aeneid").

Unlike some scholars, Dr. Fagles said he believed that Homer's epics were written by a single poet of the eighth or ninth century B.C., not by an anonymous group.

"I don't want to think of 'The Odyssey' as having been written by a committee," Dr. Fagles said. "He composed his work at a time when a rudimentary alphabet was entering Greek culture. Homer was not essentially a writer. He was a singer."

Dr. Fagles, who published a collection of original poetry in 1978, set his translations in unrhymed six-beat lines that maintained "a sense of the sweep and the sonority of the original," classicist Mary Lefkowitz wrote in 1990.

"I didn't want to be too literal. Or too literary," Dr. Fagles said.

With "The Aeneid," he departed from the familiar opening phrase first translated by the 17th-century English poet John Dryden as "Of arms and the man I sing."

Dr. Fagles began his tale of Aeneas, the legendary founder of Rome, with a more humble tone: "Wars and a man I sing - an exile driven on by Fate."

Calling "The Aeneid" a "cautionary tale" about "a common soldier left terribly alone in the field of battle," Dr. Fagles continued:

"It speaks of the terrible price of victory in war, for Virgil knew that victory is finally impossible, that it always lies out of reach. He saw the unforeseen aftermath, the way war could all go wrong whether from poor planning or because of the gods on high. He knew the sheer accumulation of death, the destruction, the pain we inflict when we use force to create empire."

Dr. Fagles was born Sept. 11, 1933, in Philadelphia and went to Amherst College with the aim of studying medicine. After reading Richmond Lattimore's translation of "The Iliad," he began studying Greek and Latin as a college junior. He received a doctorate in English from Yale University in 1959 and taught there before joining the Princeton faculty in 1960.

His first work of translation was the complete poems of Bacchylides (1961). He published a collection of his own poems, "I, Vincent: Poems From the Pictures of Van Gogh," in 1978.

Dr. Fagles became director of Princeton's program in comparative literature in 1966, then served as founding chairman of the department from 1975 to 1994. He taught a seminar on epic poetry in translation that was one of the university's most popular courses until his retired in 2002.

In describing his life's work, Dr. Fagles said, "My feeling is that if something is timeless, then it will also be timely."