Arthur C. Clarke, 90; was poet laureate of the space age 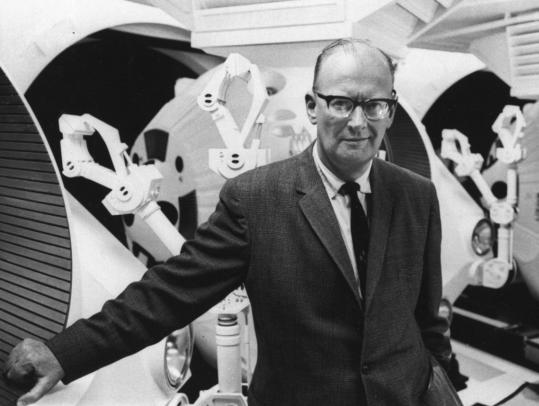 WASHINGTON - Arthur C. Clarke, the world-famous science-fiction writer, futurist, and unofficial poet laureate of the space age, died of a respiratory ailment March 18 at his home in Colombo, Sri Lanka. He was 90.

Mr. Clarke co-wrote, with director Stanley Kubrick, the screenplay for "2001: A Space Odyssey," which is regarded by many as one of the most important science fiction films ever made. A prolific writer, with more than 100 published books, he was praised for his ability to foresee the possibilities of human innovation and explain them to nonscientific readers.

The most famous example is from 1945, when he first proposed the idea of communications satellites that could be based in geostationary orbits, which keep satellites in a fixed position relative to the ground.

Some scoffed, but the idea was proved almost a generation later with the launch of Early Bird, the first of the commercial satellites that provide global communications networks for telephone, television, and high-speed digital communication. The orbit is now named Clarke Orbit by the International Astronomical Union.

"He had influenced the world in the best way possible," writer Ray Bradbury said in Neil McAleer's 1992 book "Arthur C. Clarke: The Authorized Biography." "Arthur's ideas have sent silent engines into space to speak in tongues. His fabulous communications satellite ricocheted about in his head long before it leaped over the mountains and flatlands of the Earth."

In addition to his books, he wrote more than 1,000 short stories and essays. One of his short stories, "Dial F for Frankenstein" (1964), inspired British computer scientist Tim Berners-Lee to invent the World Wide Web in 1989.

Mr. Clarke also popularized the idea of a space elevator as an energy-efficient alternative to rockets. Conceived by a Russian engineer in 1960 and re-invented at least four times in the next decades, Mr. Clarke's inclusion of the idea in a 1979 novel brought it to popular attention and helped launch a new field of study. He told New Scientist magazine last year that it would be built "50 years after everyone stops laughing."

But it was his collaboration with Kubrick in the 1968 film that made him internationally famous. The screenplay for "2001: A Space Odyssey" was based on Mr. Clarke's 1951 short story "The Sentinel," and Mr. Clarke simultaneously wrote the companion novel, which was released three months after the film and was believed by many to be a more detailed explanation of the ideas in the film.

Mr. Clarke's work inspired the names of spacecraft, an asteroid, and a species of dinosaur. He joined American broadcaster Walter Cronkite as a commentator on the Apollo moonshots in the late 1960s. Two television series in the 1980s spread his ideas around the world.

He was knighted in 1998, nominated for the Nobel Peace Prize in 1994, and received the Franklin Institute gold medal, the United Nations Educational, Scientific, and Cultural Organization-Kalinga Prize, and other honors.

Mr. Clarke, a resident of Sri Lanka since 1956, worked with Jacques Cousteau and others to help perfect scuba equipment. He moved to the country, then known as Ceylon, to open a dive shop and explore the undersea world. Disabled by post-polio syndrome, the lingering effects of a disease that had paralyzed him for two months in 1959, Mr. Clarke said diving was as close as he could get to the weightless feeling of space.

"I'm perfectly operational underwater," he once said. His dive shop was destroyed in the 2004 tsunami.

Born Dec. 17, 1917, in Minehead, Somerset, England, he was the son of a postal-service-engineer-turned-farmer and a post office telegrapher. He became addicted to science fiction at 11.

In 1936, he moved to London and joined the British Interplanetary Society and began writing science fiction. After enlisting in the Royal Air Force in 1941, he became a radar instructor and participated in the development of ground-controlled landings of aircraft under zero-visibility conditions. That experience proved the inspiration for his only nonscience fiction novel, "Glide Path."

It is also where, in 1945, he wrote an RAF memo about satellites. He later revised it and submitted it as "Extra-Terrestrial Relays" to Wireless World, which almost rejected it as too far-fetched. He was wrong about some things: He expected that three satellites would take care of the world's communication needs and that each would require a crew in residence.

After World War II, Mr. Clarke obtained a bachelor of science degree in physics and mathematics at King's College, London.

In 1954, Mr. Clarke wrote to Harry Wexler, then chief of the Scientific Services Division at the US Weather Bureau, about satellite applications for weather forecasting. From these discussions, a new branch of meteorology was born.

Mr. Clarke's marriage to Marilyn Mayfield ended in divorce. Survivors include a brother and sister, both of whom live in England.

According to a news release from the Arthur C. Clarke Foundation, Mr. Clarke reviewed the final manuscript of his latest science fiction novel, "The Last Theorem," a few days ago. It is scheduled to be published later this year.

He told the Associated Press that he didn't regret never going into space because he had arranged to have the DNA from his hair sent into orbit.

"Some day, some supercivilization may encounter this relic from the vanished species and I may exist in another time," he said. "Move over, Stephen King."

In a 90th birthday video recorded in December, Mr. Clarke said he had three last wishes: that someone find evidence of extraterrestrial life, that the world adopt clean energy sources, and that an end be found to the long civil war in Sri Lanka.

"I'm sometimes asked how I would like to be remembered. I've had a diverse career as a writer, underwater explorer, space promoter, and science popularizer," he said. "Of all these, I want to be remembered most as a writer - one who entertained readers, and, hopefully, stretched their imagination as well."