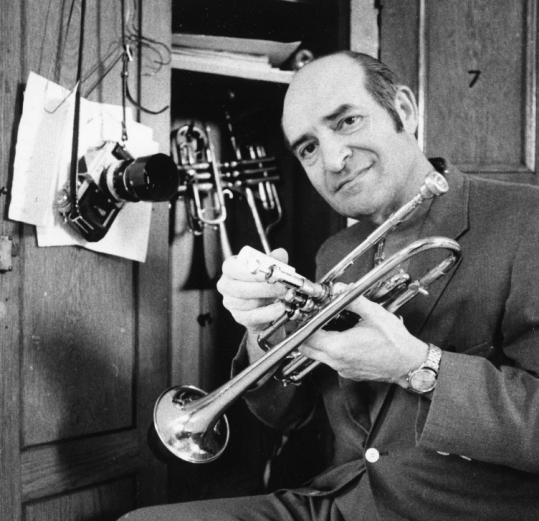 Roger Voisin was asked to join the Boston Symphony Orchestra when he was 17. (THE BOSTON GLOBE/file 1971)
Email|Print|Single Page| Text size – + By Jeremy A. Eichler Globe Staff / February 15, 2008

Roger Louis Voisin, one of the most influential orchestral trumpet players of the mid-20th century, died after a long illness Wednesday at a nursing home in Newton. Mr. Voisin, who at 17 became the youngest musician ever to join the Boston Symphony Orchestra, was 89.

One of the few remaining links to the storied Koussevitzky era of the BSO, Mr. Voisin joined the trumpet section in 1935 and retired in 1973. His career spanned four music directors, and he served as the BSO's principal trumpet from 1950 to 1965.

"Roger was legendary in the trumpet world and had a very elite status among American brass musicians," said Thomas Rolfs, the current principal trumpet of the BSO. "He was admired as a player, for his contributions to premieres and recordings, and as an educator." A critic reviewing one of Mr. Voisin's albums in The in 1959, wrote: "Here is the French school of brass playing at its coolest and suavest. No big, fat, blary German tone, only controlled, sweet sound."

Mr. Voisin was born in Angers, France, and moved to Boston at age 11. His first teacher was his father, Réne, who was also a member of the BSO, and he later studied with BSO players Marcel LaFosse and Georges Mager. In 1933, Mr. Voisin met future BSO horn player Harry Shapiro at a stage show at the Metropolitan Theatre, a meeting Shapiro still recalled more than seven decades later. "This kid who had won a newspaper contest showed up to play a solo." Shapiro told the Globe in 2004. "He blew the hell out of the trumpet - Roger was playing his father's horn - and I said to myself, 'I gotta meet this guy.' "

At around the same time, Mr. Voisin was serving as a signaler at the Esplanade concerts, recalling orchestra and audience members after intermission, when he came to the attention of Boston Pops conductor Arthur Fiedler. He later joined the Boston Pops and then, with a nod from Fiedler, auditioned for the BSO at age 17. His father was vehemently opposed to the idea.

Finally, after another BSO colleague intervened, Mr. Voisin, joined the BSO and embarked on a highly successful career.

After serving in the Navy during World War II, teaching trumpet and conducting, Mr. Voisin succeeded Mager as the principal trumpet, adding to the French sheen that the Alsatian conductor Charles Munch polished during his tenure as music director from 1949 to 1962. In Munch's New York Times obituary, Mr. Voisin is quoted likening the conductor to "a great impressionist painter."

Mr. Voisin lent his brilliant sound and distinctive vibrato to many early recordings of the modern orchestral repertoire (including works by Bartok, Scriabin, and Stravinsky), but he also made numerous albums of solo trumpet works, bringing the trumpet's charms as a solo instrument to the ears of a broader public.

Over the years, he edited dozens of editions of trumpet works for International Music, including several volumes of orchestral excerpts, which aid students by serving, effectively, as road maps of the orchestral trumpet repertoire.

After his retirement from the BSO, he taught at New England Conservatory and Boston University and at the Tanglewood Music Center, where he both coached performance and taught solfege.

His trumpet students have taken up positions in professional orchestras from Honolulu to Montreal.

Peter Chapman, second trumpet of the BSO, studied with Mr. Voisin, and he recalled going to his teacher's home on Sunday mornings in 1969. "He had a library wall of repertoire in alphabetical order, and he started with A and kept going until I said, 'I don't know that one.' He'd put it on the stand and off we'd go. It didn't seem to matter to him how hard it was."

Chapman added: "He was an exceptionally exciting player. He had all kinds of flair and personality in his playing, something maybe you don't hear so much in the symphonic world these days."

Mr. Voisin seemed to agree with this broader assessment. He told the Globe in 2003, "What I miss when I listen to orchestras today is the signature of individual players and of the ensemble. When you used to listen to an orchestra, Philadelphia or Boston or New York, you would know immediately which one it was; nowadays I have a hell of a time finding out who's playing. It is superb; it is beautiful; but it doesn't have a signature."

A memorial service will be held at a later date.