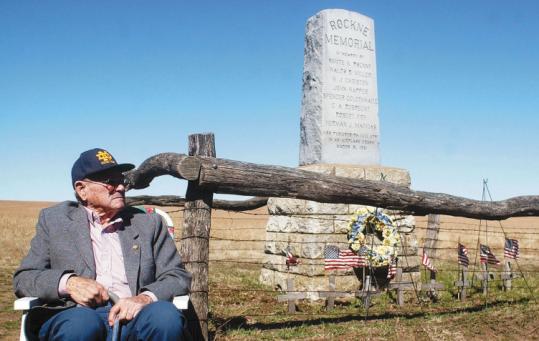 NEW YORK - James Easter Heathman, the teenager who raced to a field near his family's central Kansas farm and found the plane crash that killed Notre Dame football coach Knute Rockne, died Tuesday of pneumonia in a hospital in Emporia, Kan. Mr. Heathman was 90.

Tom Heathman said he and his father had been taking people to the crash site, located on private land near the Heathman farm, for about 20 years. He said his father gave free tours because he wanted to honor Rockne, who at 43 was at the height of his career at the time of the March 1931 crash.

Rockne led the Fighting Irish to consecutive undefeated records his final two seasons. His death, which President Hoover called "a national loss," made front-page news across the country.

"Easter was a wonderful man whose lifelong dedication to honoring the memory of Knute Rockne will forever be appreciated by Notre Dame," said Dennis Brown, school spokesman.

Tom Heathman said his father, who was a week shy of his 14th birthday when the plane crashed, heard the plane overhead.

"Then the operator rang shortly after that" and told them it appeared a plane had crashed, Tom Heathman said. "He got in an old Model T with his dad and a couple of his brothers and drove up there."

When they arrived, 3 miles southwest of Bazaar, Kan., they saw the plane's tail section sticking up out of the ground.

"There were five bodies flung out onto the ground; the two pilots were still inside," Tom Heathman said. "They stayed until the undertaker came, and they helped load the bodies.

"'It was pretty traumatic for him," Tom Heathman said.

He did not talk about the crash much with his children until the last two decades, his son said. Many of the visitors to the crash site monument have been Notre Dame alumni. Mr. Heathman had been to Notre Dame for a handful of football games and to tell his story to a gathering of university alumni. He also met Rockne family members, his son said.

Several alumni kept in touch with him over the years.

"He had his immediate family, and he had his Notre Dame family. He loved them," said Sue Ann Brown, his daughter. "That was one of the things he said on the last day he was talking: 'They're a great bunch of people.' It brought a tear to his eye."