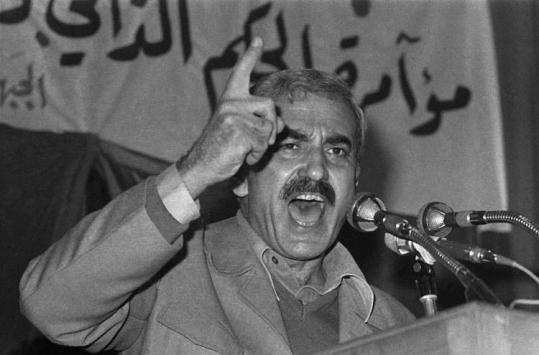 AMMAN, Jordan - George Habash, whose radical PLO faction gained notoriety after the simultaneous hijackings of four Western airliners in 1970 and the seizure of an Air France flight to Entebbe, Uganda, died Saturday in Jordan. He was 81.

The former guerrilla leader, whose rivalry with Yasser Arafat spurred him to start the Popular Front for the Liberation of Palestine, died of a heart attack in Amman, said Leila Khaled, a longtime PFLP member.

Born to a Christian Arab family, Mr. Habash opposed Arab-Israeli peace talks. His group was the second-largest in the PLO after Fatah, the faction of Arafat and current Palestinian President Mahmoud Abbas.

Mr. Habash and his group gained notoriety for the 1970 hijackings of four Western airliners over the United States, Europe, the Far East, and the Persian Gulf. The aircraft were blown up in the Middle East after passengers and crews disembarked.

Mr. Habash promoted the Palestinian cause through terrorist attacks in the 1970s, including the hijacking of an Air France airliner to Entebbe, Uganda, where four civilians were killed during a rescue operation by Israeli paratroopers.

The group also was responsible for gunning down 27 people at Israel's Lod airport in May 1972. And it was credited with one of the first Palestinian hijackings, of an Israeli El Al flight from Rome to Tel Aviv in 1968. PFLP gunmen ordered it flown to Algeria, but no one was hurt.

Mr. Habash did not mastermind the attacks, but he became a prime target for Israel's secret service.

An uncompromising revolutionary, particularly after the Arabs' catastrophic defeat by Israel in 1967, he refused to unconditionally ally himself with any Arab regime, unlike many of his contemporaries.

Among the last of the old-guard Palestinian leaders, Mr. Habash, a pediatrician, was known by his followers as "al-Hakim" - Arabic for doctor.

Mr. Habash fled his hometown of Lydda, in what is now Israel, in 1948 and went on to graduate first in his 1951 class at the American University of Beirut. He launched the Popular Front in December 1967, six months after the Arabs lost the West Bank, Gaza Strip, and Golan Heights to Israel.

The current deputy secretary-general of the PFLP, Abdel Raheem Mallouh, called Mr. Habash a "distinguished leader . . . who struggled for more than 60 years without a stop for the rights and the interests of his people."

Mr. Habash opposed interim peace agreements with Israel, in part because they did not require Israel to stop settlement construction. Throughout his life, he supported the use of violence against Israel, arguing that Israel would not make the concessions required for a peace agreement.

However, since the early 1980s, he came to support the PLO platform, which calls for the establishment of a Palestinian state in the occupied territories and a "right of return" of Palestinian refugees.

Mr. Habash frequently criticized Arafat, particularly during his attempts to negotiate with Israel. And it was the PFLP's hijackings that did much to shape the image of the PLO as a terrorist organization. Israel refused to negotiate with it as a result.

An Israeli Mirage fighter intercepted a Lebanese Caravelle airliner flying from Beirut to Baghdad in August 1973, believing Mr. Habash and his top lieutenants were on board. But after the plane was forced down, the Israelis did not find Mr. Habash and his men among the 74 passengers. Mr. Habash had felt unwell and changed his travel plans at the last minute.

In recent years, Mr. Habash was mostly bedridden, with partial paralysis on his right side caused by brain surgery he underwent in France. Earlier last week, he checked into a hospital in Amman, complaining of fatigue. Mr. Habash died of a severe heart attack around 8:15 p.m. yesterday, days after he underwent a surgery to implant a stent, said his surgeon Dr. Harran Zreiqat.

Several PFLP members, along with Habash's relatives, gathered late yesterday in a closed room at the hospital where he died. Funeral arrangements were under way, and Mr. Habash was likely to be buried in Jordan, where he had been living since 1992, Khaled said.