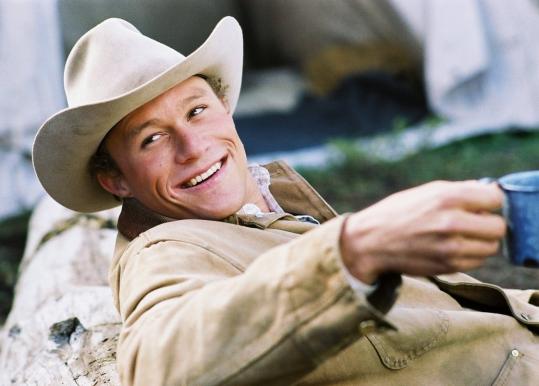 Heath Ledger, who went from teen idol in his native Australia to become one of the most exciting actors of his generation, was discovered dead at his New York apartment yesterday afternoon. Sleeping pills were found near his body, according to news reports. He was 28.

Mr. Ledger was best known for his Oscar-nominated role as a closeted gay ranch hand in Ang Lee's "Brokeback Mountain," a role that was risky for a young actor on the rise. But Neil Armfield, director of Mr. Ledger's last Australian movie, "Candy," said yesterday that it was characteristic of how he had taken charge of his career.

"He made a decision about four years ago to stop being led by producers and managers and to forge his own way," Armfield told ABC Radio, according to the Sydney Morning Herald. "He started working with the most interesting directors. He was so successful at breaking out of the teen idol image."

When Mr. Ledger was at his best, often portraying unstable characters - outcasts, junkies, philanderers, men who were happiest unhappy, lost in their own dysfunction - the intensity of his performances was what left you worried, not reports about a high-energy off-screen life. The public had been keeping its eye on other, more trifling, troubled stars, and this truly talented one rarely made a blip on the radar. His death came as a shock.

Mr. Ledger did not have a conventional movie star's carriage; he had a long, ropy body that was more lead singer than leading man. It was a body for trouble. Those shadows were there even in his first Hollywood movie, "10 Things I Hate About You," a teen-comedy remake of "Taming of the Shrew" from 1998 with Ledger as the high-school bad boy who falls for smug Julia Stiles. Imagine James Dean in one of those 1950s beach movies. But when it was time to go to the prom, Mr. Ledger put on his jacket and danced.

Before that he was carrying Fox's historical-action show "Roar." He played a cute, speech-giving prince trying to lead his kingdom to freedom. The show was part of that cheesy fantasy trend that "Xena: Warrior Princess" and "" helped spawn. It barely lasted the summer of 1997.

Eventually, Mr. Ledger gave his first smoldering performance as Mel Gibson's soldier son in 2000's "The Patriot." After that, he found himself in the position of being a rising star in search of an appropriate universe to shine. He was being called "hunk" and "heartthrob" and was cast in movies that tried to maximize his appeal to young girls.

In "A Knight's Tale," his dirty blond hair was full and yellow. He did more dancing. In "Four Feathers," he was still adorable but slightly more serious playing a British officer who goes to fight in the Sudan in the 1890s. Other starring roles came - a priest in "The Order," a throwaway thriller; a would-be attention-getting role as the Australian folk hero Ned Kelly in an eponymous epic - but the audiences never did.

In 2005, Mr. Ledger turned a major corner. And he had a supporting part as a burnt-out surfer in "Lords of Dogtown," a good movie that he walked off with. It was the first truly funny thing he had done. But it was not just funny; it was Ridgemont High's Jeff Spicoli with a soul.

His tightly coiled, devastatingly emotional performance in "Brokeback" was heroic. More than one critic called it the stuff of legend. His achievement in that film was to find a way to dramatize the personal terror of feeling something you don't understand. Loneliness radiated from him like heat. He gave us the torture of self-loathing, but he never took the part over the top.

A few months later he was back in theaters as the titular, flamboyant, heterosexual "Casanova," a bedroom comedy that confirmed Mr. Ledger could be amusing, happy, and self-deprecating. And in 2006, he gave another startlingly good performance as a junkie in "Candy," a film that brought him back to Australia. Last year, he played an actor who once played a Bob Dylan-like character in Todd Haynes's "I'm Not There." Those were all movies that failed to make an impression with mainstream moviegoers.

This year that was expected to change with his role as the Joker in Christopher Nolan's "The Dark Knight." The film is scheduled for release in the summer. Mr. Ledger slinks around the film's promotional trailer looking like a box of crayons blew up in his face. He's not a joke. He's a bogeyman.

It was a wordless kind of humanity that Mr. Ledger gave to all his roles that made many of his performances great and that communicated the struggle to feel normal, whatever that meant.

An autopsy has reportedly been scheduled for today.