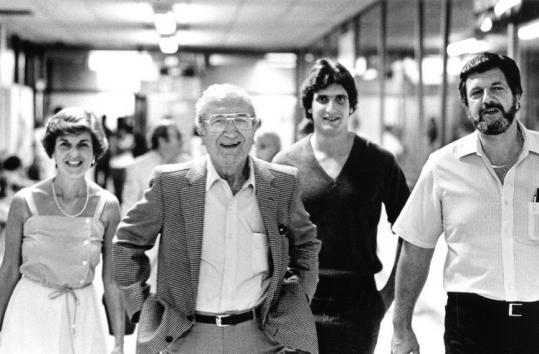 LOS ANGELES - Salvatore "Bill" Bonanno, the eldest son of the late Mafia boss Joseph Bonanno who became the number 2 man in his father's crime family in the mid-1960s and shortly thereafter escaped a gangland hit on a sidewalk in Brooklyn by Mafia members protesting his promotion, has died. He was 75.

Mr. Bonanno, who later served prison time and became an author, died Tuesday in a Tucson hospital after suffering a heart attack at his home, his nephew, Anthony Tarantola, said Wednesday.

Mr. Bonanno told the Los Angeles Times in 2005 that he never intended to follow in the footsteps of his Sicilian-born father, the founder of one of New York's five Mafia crime families. Dubbed "Joe Bananas" in the tabloid press, Joseph Bonanno was once described by Time magazine as "one of the bloodiest killers in Cosa Nostra's history."

"Bill was raised to be legit," said Gay Talese, author of "Honor Thy Father," the 1971 bestseller that chronicled the rise and fall of the Bonanno family. The book was turned into a 1973 CBS TV movie.

"He was a college kid who went to the University of Arizona and was sort of like a kid with a silver spoon in his mouth," Talese said Wednesday. "His father was an affluent man, and the son grew up in that style."

Born in Brooklyn on Nov. 5, 1932, Bill Bonanno developed a mastoid ear condition when he was a boy. Advised by a doctor to get his son out of the cold climate of Long Island, where they lived, Joseph Bonanno in 1941 bought a second home in Tucson, where Bill and his sister, Catherine, were enrolled in a Catholic school.

Bill Bonanno attended boarding schools and Tucson High School before enrolling in the University of Arizona. He first studied agriculture with the intention of possibly managing his family's ranch and later studied business before considering a foreign-service career.

But his life changed in the 1950s when his father came under scrutiny by authorities. Prompted by loyalty, Mr. Bonanno said in 2005, he returned to New York to act as a conduit between his father and other members of the Bonanno crime family.

In the wake of a 1957 raid of a large meeting of national Mafia leaders in Apalachin, N.Y., and subsequent prosecution by federal and state authorities, Talese said, Bill Bonanno "entered organized crime at a time when it was more perilous than had been the case when his father ran things pretty much his own way from the '30s to the late '50s."

And, Talese said, "little by little, Bill gets in deeper and deeper" - to the point where, about 1965, his father thought his son ought to become his second in command.

The problem, Talese said, was not everyone in the 450-man Bonanno organization wanted Bill Bonanno to be the number 2 man.

"There were the loyalists and the disloyalists," Talese said. "The old man putting the son higher than a lot of people believed he should be led to rancor within the organization, and a faction took it upon themselves to express their disagreement with bullets."

The tabloids dubbed it "the Banana War," and Bill Bonanno became one of the targets.

"I heard the bullets going over my head," he said in 2005, recalling being ambushed in Brooklyn. "If they knew what they were doing, I wouldn't be here."

Mr. Bonanno, according to his website, was imprisoned in 1968 for contempt and other white-collar charges. From then until 1993, he was imprisoned several times for a total of 12 years.

Mr. Bonanno was the author of "Bound by Honor: A Mafioso's Story," his 1999 autobiography. He also co-wrote the 2005 novel "The Good Guys," with Joe Pistone, the former FBI agent who infiltrated the mob under the name Donnie Brasco. He also was an executive producer of the 1999 Showtime miniseries "Bonanno: A Godfather's Story."