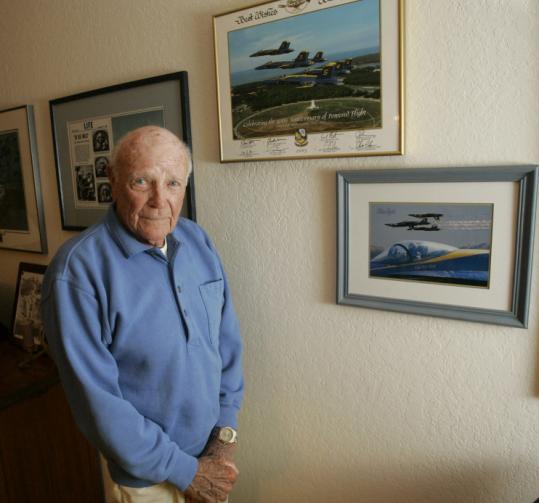 SAN FRANCISCO - Raleigh "Dusty" Rhodes, an early leader of the Blue Angels flight demonstration team who flew combat missions in two wars and was a prisoner of war, has died. He was 89.

He flew fighters off of the USS Enterprise during World War II. In the Battle of Santa Cruz Islands near Guadalcanal in October 1942, he was shot down and captured by the Japanese.

He spent the next three years in a prisoner camp, where he was beaten and starved, his daughter said. Mr. Rhodes weighed about 88 pounds when he emerged from the camp at war's end, she said.

During his imprisonment, he was interrogated by Admiral Isoroku Yamamoto, who had planned the attack on Pearl Harbor.

Her father would talk about this imprisonment "if you asked him about it," Debra Rhodes said. "He wouldn't bring it up."

After his return from the camp, Mr. Rhodes joined the Blue Angels in their second year. He soon became the third leader of the precision flying team.

Aerobatic flying was therapeutic, Mr. Rhodes said in an interview last year at a reunion and air show to mark the Blue Angels' 60th anniversary. "I was so busy flying that I didn't have time to think about the war," he said.

Mr. Rhodes helped the team perfect the diamond barrel roll, where four jets perform a loop in a tight diamond formation, becoming inverted at the top.

The Blue Angels were an instant success, creating traffic jams whenever they performed, he said.

"We were a hit, oh yes, gee whiz, we were," Mr. Rhodes said. "It is the greatest type of flying and they are the greatest team in the world."

Mr. Rhodes also flew fighter planes off an aircraft carrier in the Korean War. After 20 years in the Navy and many medals including two Purple Hearts and three Air Medals, he retired with the rank of commander. A book was published about him last year.