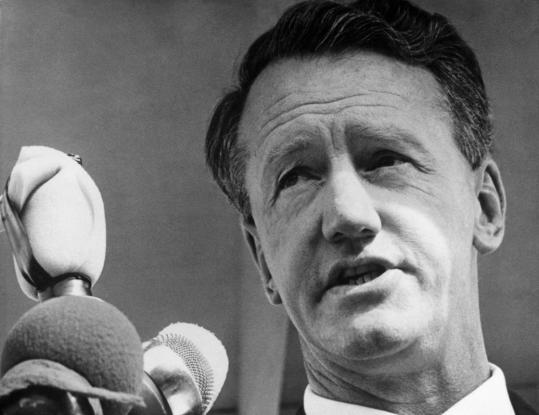 WASHINGTON - Ian Smith, the steely prime minister of Rhodesia (now Zimbabwe) who unilaterally declared the former British colony's independence in 1965 and spent 14 years defying international sanctions and calls for black majority rule, died yesterday at a clinic near Cape Town, South Africa, after a stroke. He was 88.

Mr. Smith had lived in self-imposed exile in Cape Town in recent years.

He was a cattle farmer before rising to power within a nationalist political movement of white settlers called the Rhodesian Front. Their goal was to resist Great Britain's post-World War II efforts amid a broader geopolitical trend to turn over European colonies in Africa to black majority rule. "Never in a thousand years," Mr. Smith famously announced.

The Rhodesian Front, later described by England's satiric Punch magazine as a "surrey with the lunatic-fringe on the top," won the country's top offices in 1962 in reaction to a constitution urged by England that would have permitted greater black participation in Rhodesia's parliament.

Mr. Smith became prime minister in 1964 and denounced the proposed constitution. After fruitless talks with Britain on finding a compromise, Mr. Smith proclaimed unilateral independence - making Rhodesia the second British territory, after the United States in 1776, to take such a step without approval by the crown. England declared his actions "treasonous."

The segregationist political system Mr. Smith maintained, including race-based restrictions on voting and land rights, was supported by counterinsurgency efforts that cost tens of thousands of lives before Mr. Smith was forced to step down in the late 1970s.

He also instituted martial law by calling a state of emergency and aggressively deploying a brutal central intelligence service and commando unit. That approach to governing continued under Robert Mugabe, a onetime black rebel leader who became prime minister of the newly named Zimbabwe in 1980.

Terence Ranger, an emeritus professor of race relations at Oxford University and a leading authority on Rhodesia/Zimbabwe, said Mr. Smith's refusal to hand over power sooner "was a disastrous and destructive delay" that resulted in continued authoritarian rule.

The economic destruction and political repression that define Zimbabwean life under Mugabe have served to enhance Mr. Smith's reputation as a courageous patriot among some Rhodesian-era whites. Mr. Smith also endeared himself to his supporters for his accessibility and unpretentious living habits. "Good old Smithy," as he was called, rarely traveled with an entourage of guards.

He once denied he was an extremist, adding, "I have certain values I believe in, quietly and firmly, without shouting or waving my arms about."

The youngest of three children, Ian Douglas Smith was born April 8, 1919, in Selukwe, a Rhodesian mining town now called Shurugwi. His Scottish ancestors settled there at the end of the 19th century. His father was a farmer and businessman who bred champion race horses.

Mr. Smith called his father "one of the fairest men I have ever met, and that is the way he brought me up. He always told me that we're entitled to our half of the country and the blacks are entitled to theirs."

When England went to war with Germany in 1939, Mr. Smith joined a Rhodesian squadron of the British Royal Air Force.

He became a Spitfire fighter pilot and endured a painful hospital stay after he burned his face in a plane crash. He returned to combat and was shot down over the Po valley in Italy. He disguised himself as an Italian peasant and made his way back to Allied lines.

After the war, he finished his college degree, married, began ranching, and won election to parliament in Southern Rhodesia (later just Rhodesia).

He became part of an effort among British settlers in the region to form a federation of British colonies to preserve white-minority rule. In 1953, this resulted in the establishment of the Federation of Rhodesia and Nyasaland, comprising Southern Rhodesia, Northern Rhodesia (now Zambia), and Nyasaland (now Malawi).

The federation lasted a decade, despite increasing demands among black Rhodesians for greater political say.

In 1961, Mr. Smith helped form the Rhodesian Front. The group's principal mission was to thwart British efforts to bring black rule to Southern Rhodesia, and it gained support among whites who had been horrified by the civil war and bloodshed caused by the abrupt departure of the Belgians from Congo in 1960.

Winston Field, a tobacco farmer in the Rhodesian Front, became prime minister in 1962, and Mr. Smith was his deputy. Field, who was unable to win independence from England, was ousted by his party and replaced by Mr. Smith.

As prime minister, Mr. Smith frustrated a series of British leaders, including Alec Douglas-Home and Harold Wilson, and engineered a national referendum of all registered voters that showed Rhodesians favored independence.

This vote was rigged in his favor; the registered voters consisted of 89,594 whites and 12,664 blacks. The rest of the black population (then about 2 million) was consulted through the tribal system of village and tribal chiefs. He easily won the support of the chiefs, whose salaries the government controlled.

Mr. Smith's government declared unilateral independence from England on Nov. 11, 1965. "We Rhodesians have rejected the doctrinaire philosophy of appeasement and surrender," he said. "The decision which we have taken today is a refusal by Rhodesians to sell their birthright."

As internal dissent grew, Mr. Smith resorted to martial rule and did not hesitate to use a commando unit called the Selous Scouts to kill alleged terrorists in Rhodesia or anti-government forces using Mozambique as a staging ground.

What contributed greatly to his downfall was the decision in the mid-1970s by leaders in apartheid South Africa, particularly Prime Minister B.J. Vorster, to abandon financial and political support under pressure from the United States. Vorster feared that Rhodesia's civil war would spill over.

In 1979, all major Rhodesian parties as well as American and British diplomats convened in London. Mr. Smith won concessions that allowed whites to retain large swaths of property and postponed discussions of land redistribution. In later years, Mugabe, who has taken the title of president, encouraged often-violent expulsion of whites from their lands.

On the 100-seat parliament, 20 seats were reserved for whites for seven years, and Mr. Smith controlled the white bloc. He used his position to urge the country's 200,000 whites to stay despite Mugabe's increasingly bloody purges of political opponents.

In the late 1980s, the black majority suspended Mr. Smith from parliament for urging whites in South Africa to maintain apartheid rule. He soon retired from political office but continued to give interviews criticizing Mugabe as a "communist gangster."

Mr. Mr. Smith's wife, Janet, died in 1994. His son, Alec, from whom he was estranged for many years, died in 2006. He leaves two stepchildren, Robert and Jean; and six grandchildren.