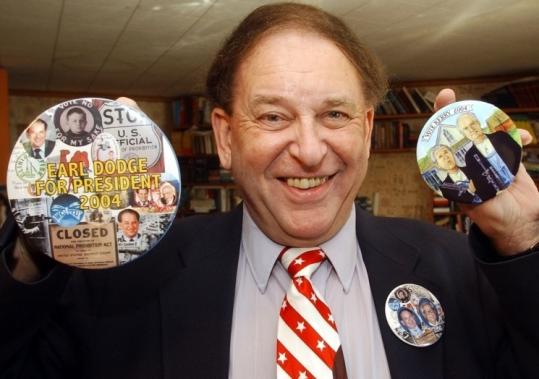 DENVER - Earl Dodge, a perennial presidential candidate with the Prohibition Party, died Wednesday. A native of Malden, Mass., he was 74.

Mr. Dodge, who lived in the Denver suburb of Lakewood, collapsed and died at Denver International Airport at the start of a business trip, said his daughter, Faith Nelson. The cause of death had not been determined.

An activist in the Prohibition Party since 1952, Mr. Dodge ran for president in every campaign since 1984. Earlier this week, his family received campaign buttons for his seventh bid for the White House in 2008.

He had mounted 13 campaigns across nearly every level of government beginning with a 1969 run for city council in Kalamazoo, Mich. He never won a race.

Family and colleagues said he was undaunted even as the party's prominence continued to slip from its heyday before the 1933 repeal of the 18th Amendment, which had banned alcoholic drinks.

"He firmly believed in the party, more so than many people believe in anything," said Howard Lydick, Mr. Dodge's running mate in 2004. "He was very concerned about personal integrity."

Lydick, 78, of Richardson, Texas, said he and Mr. Dodge were working on strategies to get on the ballot in more states in 2008. In 2004, they had managed to make it on the ballot only in Colorado, which allows any political party to nominate a presidential candidate. They received 140 votes.

After decades in the party, Mr. Dodge was the subject of a split among prohibitionists in 2004. A faction of the party spurned him and nominated the Rev. Gene Amondson for president.

"He very much saw things as black and white," said Nelson, one of Mr. Dodge's seven children. "When he thought something was right, he did not care if he was the only person to stand up and say it."

He was a Baptist Sunday school teacher, and his family said his faith permeated his politics.

Mr. Dodge's love of politics and history led him to own a campaign memorabilia business. He was on his way to a memorabilia show in Pennsylvania when he died.

Mr. Dodge was born in 1932. According to the party's website, he attended public school at Malden but dropped out at the 10th grade following the death of his father.

He began volunteering with the Prohibition Party at 19 - two years before he could vote at the time, his wife, Barbara, said.