With behind-the-lens stories from Globe photographers, as told to Chona Camomot
By John Tlumacki, Boston, April 3
I got a frantic phone call that the jury had just reached a verdict in a court case and can I get to the courtroom as soon as possible. It was so crowded in there. I kind of found my place right between two rows of benches, and little did I know I was standing right next to the victim’s son, Sergio Roman [right]. He just basically broke down in tears. He was 2 feet away from me. People were looking at me like, “Oh, don’t do that. Don’t take pictures.” That’s my job. He wasn’t at all upset that I was taking the pictures. I think that moment captured the whole ordeal that he went through. I think it was a good end for a horrible story about his mother, who was murdered. 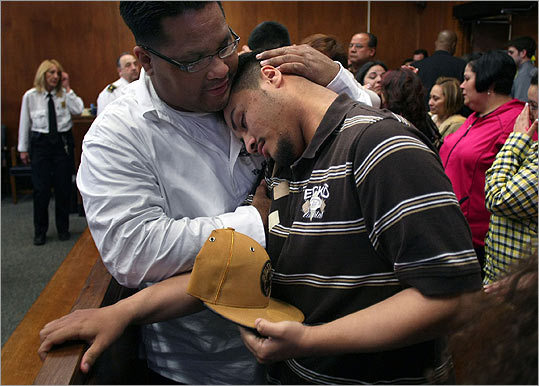