With behind-the-lens stories from Globe photographers, as told to Chona Camomot
By Joanne Rathe, Littleton, July 5
We went into the First Baptist Church, and the ministry dog sat down in the pews, which made it a little bit challenging to show how the dog is interacting with the service. Two little kids decided to sit behind the dog, because I think it probably makes the service a lot more fun for them. They would interact with the dog every once in a while, but it was low and on the floor. So I took my camera and put it on the floor and kind of fired away. The kids are not making a scene out of it – they want to pay attention to the dog, but you feel like they’re also listening to what’s going on around them. They want the dog to know that they’re there with him. That’s why I think it works. It kind of tells the story in a quiet way. 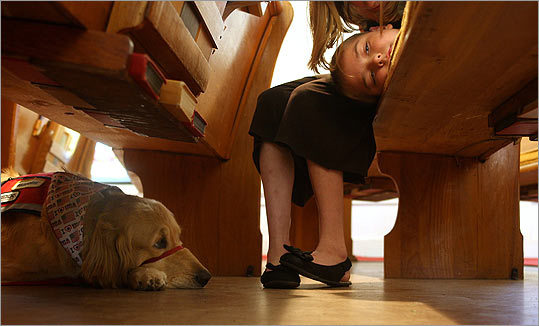