With behind-the-lens stories from Globe photographers, as told to Chona Camomot
By Yoon S. Byun, West Roxbury, July 22
This picture came out of a day that I spent following mayoral candidate Michael Flaherty. It can be somewhat monotonous, because you are hearing the same thing over and over again. What happened in this instance was that he was knocking on someone’s door and the person didn’t answer the door. They just responded from inside and opened their window. Michael Flaherty is a very personable person. He always shakes people’s hands when he meets them. When this man responded, Flaherty just stuck his hand out and wanted to shake his hand. It was an unusual way to greet somebody. That front door never opened when I was there. 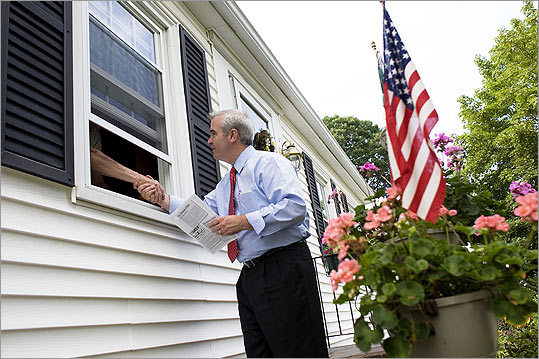