THIS STORY HAS BEEN FORMATTED FOR EASY PRINTING
Fall Travel 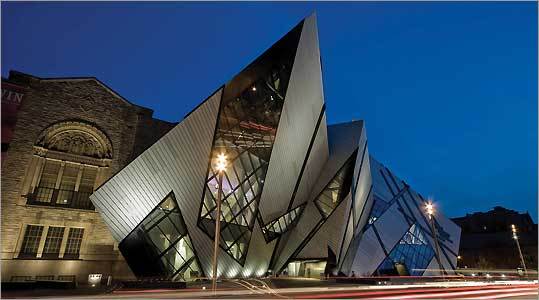 The writer Wyndham Lewis once referred to Toronto as a “sanctimonious icebox,” but a lot has changed in the past five years to alter that image and draw attention to its current moniker, “Design City.” The stylish Four Seasons Centre, home to the Canadian Opera Company and the National Ballet of Canada, opened to the public in 2006. Daniel Libeskind’s soaring glass and aluminum addition to the Royal Ontario Museum made its debut a year later, and Frank Gehry, a Toronto native, unveiled his renovation of the Art Gallery of Ontario in 2008. Seems like the ice has crystallized into a rare gem.

Getting There: The flight from Logan to Toronto takes less than two hours. American Airlines (800-433-7300; http://www.aa.com) has round-trip fares beginning at around $320. Remember to bring a passport. Toronto has good public transit (http://www.ttc.ca) and taxi services, so a rental car isn’t necessary.

Friday: Check in at the Gladstone Hotel (416-531-4635; http://www.gladstonehotel.com) in a recently gentrified section of the West Queen West neighborhood. Each of the 37 rooms is a distinct work of art created by local talent, including Room 415, where the wall behind the bed is covered by photographs of fall foliage in Toronto’s High Park. If there’s a performance that evening at the Four Seasons Centre (416-363-8231; http://www.coc.ca), you’re in for a treat. Toronto-based architect A.J. Diamond modeled his opera house on the traditional European horseshoe shape. Each of the 2,070 seats feels intimate, as if you’re hovering over the performance. But it’s the acoustics that will impress you the most. The auditorium is like an egg in a nest, sitting on 500 rubber pads and surrounded by a foot of concrete to protect the interior from any exterior noise.

Saturday: Subtlety is replaced by over-the-top derring-do as you make your way to Libeskind’s new addition to the block-long stone and brick Royal Ontario Museum (http://www.rom.on.ca) called the Michael Lee-Chin Crystal. Shards of aluminum and ribbons of glass jut out onto the sidewalk with knife-like precision. Inside, a large prehistoric turtle skeleton hangs from one of the asymmetrical walls – the building is a natural history museum with lots to see on dinosaurs, gems, and Egyptology. Libeskind’s creation consists of a series of five interlocking crystals. Atop the fifth is the restaurant C5 (416-586-7928; http://www.c5restaurant.ca), a good place for lunch, rewarding diners with exquisite vistas of the city, including the signature landmark, the CN Tower. Later that day, head to the burgeoning Distillery District, where a massive 19th-century distillery has been converted into shops, galleries, and restaurants. A must stop is the Corkin Gallery (416-979-1980; http://www.corkingallery.com), a striking space opened by Massachusetts native Jane Corkin that exhibits paintings, sculpture, photography, and other works from established and emerging artists. Nearby is Soma (416-815-7662; http://www.somachocolate.com), which creates tasty chocolate in-house, and Pure Spirits (416-361-5859; purespirits.ca), a lively restaurant known for seafood dishes like sesame-encrusted ahi tuna.

Sunday: Make a stop at the Art Gallery of Ontario (416-979-6648; http://www.ago.net), where Gehry displayed an unusual degree of restraint with his redesign. A stairwell extends out of the blue titanium back wall to reward guests with tantalizing views south over Grange Park. The highlight, however, has to be Galleria Italia on the second floor, a large lounge nestled inside a wave of glass along Dundas Street. Ribs of soft Douglas fir curve upward, as if you’ve just entered the inverted hull of a ship. See the large collection of Henry Moore sculptures, the exemplary work by the Group of Seven, Canadian landscape painters from the 1920s, and The Massacre of the Innocents, one of Rubens’s most impressive paintings.