Kids need to be out in nature, yet we keep them caged.

Decades ago, Jennie Anderson had a lasting impact on my childhood. But today, this former Haverhill teacher might get charged with child neglect for her approach. While baby-sitting, Miss Anderson, who loved nature, would share articles that caught her bespectacled eye. But her preferred approach was much more hands-on: She’d let me roam, unsupervised, in the woods up the street. Like that picture of a Monarch butterfly? Try to catch one. Want to see a tadpole become a frog? Here’s a jar, there’s the pond, have fun. I did, and I learned. Not just about bugs and critters and trees, but about how to discover and fend on my own. Those woods weren’t the Amazon jungle, but they formed a perfect playground and classroom. My parents approved of my explorations, as long as they knew when I’d be home.

True, I grew up in the era of Ozzie and Harriet and TVs with just three channels. This is the era of constantly streaming claims of lurking molesters, missing children, hovering coyotes, poisonous plants, West Nile outbreaks, Lyme disease-bearing ticks, and other reasons to fear and loathe nature. Some concern about exposing kids to the unfettered outdoors is, of course, justified, but the line between reasonable parental caution and irrational fear has been obliterated by 24/7 hype that has left children under “virtual house arrest,” as Richard Louv wrote in his 2006 book, Last Child in the Woods: Saving Our Children From Nature-Deficit Disorder. Even travel is often structured to the tightly planned minute, with little time left for unconstrained exploration of natural settings. According to a study this year by the Outdoor Foundation, participation in outdoor activities among youth aged 6 to 17 dropped more than 11 percent between 2006 and 2007. If kids are outside at all, it’s mostly for sports or other organized events. “Children now spend more time in vehicles being transported from one indoor activity to another than outside in nature,” said a study cited in the May issue of Current Problems in Pediatric and Adolescent Health Care. Returning kids to nature isn’t just about nostalgia. It’s about resetting the overall health of a generation. “An increase in sedentary indoor lifestyles has contributed to childhood chronic conditions, such as childhood obesity, asthma, attention deficit/hyperactivity disorder, and vitamin D deficiency,” researchers wrote in Current Problems.

A burst of efforts, such as the Sierra Club’s Building Bridges to the Outdoors project, seeks to encourage more outdoor activity for young people. In November, a federal task force will issue a 21st-century strategy for America’s great outdoors. But studies, hearings, and slogans (“Leave No Child Inside”) won’t significantly reduce the great disconnect between kids and nature unless parents – many raised amid “stranger danger” and other media-stoked fears themselves – are willing to grant kids more freedom and, harder yet, push them to experience the actual world beyond their cyberlives. Sheridan Steele, Acadia National Park superintendent, recalls a two-hour nature cruise off the Bar Harbor, Maine, coast during which a young child “never looked up from his Game Boy. He could have been in his driveway.” Steele wasn’t sure if he was more frustrated with the boy or with his parents.

“A lot of people, especially single parents, have a lot less time to do interesting things with their kids,” he says. “They feel that if their kids are at home on the computer or watching TV, at least they’re safe. But are they really safer watching 30,000 murderers on TV by the time they’re 18 than they are getting outdoors?” And is the ability to think independently and creatively better developed by video games or by direct exposure to the unpredictability of nature?

Such exposure should be a bigger part of family travel. A program at Acadia, for example, lets people combine the use of GPS devices with observation of natural features to get across the park. Those types of efforts also help “inspire the next generation of stewards” of conserved lands, says Steele. “Imagine what Acadia might look like 20 years from now if today’s youth remain uninspired to protect it.”

Being inspired by Miss Anderson set the path that led me to protect nearly 100 acres of land I own in New Hampshire from future development, leaving its trees, boulders, and river forever ready for other bug-bitten, thorn-scratched young explorers. If indeed they’re out there.

Phil Primack is a writer and editor in Medford. Send comments to magazine@globe.com. 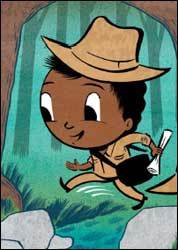