THIS STORY HAS BEEN FORMATTED FOR EASY PRINTING
Fall Travel

A great long weekend: Beyond the glitz of South Beach 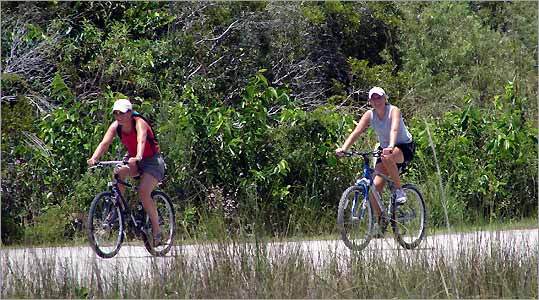 With its rooftop pool parties, celebrity chefs, and rehabbed Art Deco boutique hotels, South Beach garners more than its fair share of acclaim. This will only increase now that LeBron James and company have joined the Bentley-driving crowd on the strip. Yet, strange as it sounds, there was a time when people went to Miami for its natural beauty. Even today, you can still leave the masses behind and bike along a canal in the Everglades, where you’ll spot alligators and many large birds, and stroll amid the palmettos at the largest tropical garden in the country.

Getting There: American Airlines (800-433-7300; http://www.aa.com) flies directly from Logan to Miami, with fares that start around $320 round trip. Or take and other carriers to Fort Lauderdale and drive the extra half-hour. A rental car is essential.

Friday: Drop your bags at one of the area’s iconic hotels, Eden Roc Renaissance Miami Beach (305-531-0000; http://www.marriott.com/hotels/travel/miasr-eden-roc-renaissance-miami-beach), right next door to the famous Fontaine-bleau. Rates start at $239. Part of the Marriott chain, the Eden Roc recently underwent a $200 million renovation that included updating the rooms and adding a rooftop terrace and infinity pools (and it is planning a state-of-the-art spa by year’s end). For a more affordable option, grab one of the 17 rooms at Villa Paradiso (305-532-0616; http://www.villaparadisohotel.com), in the heart of South Beach. Rooms start at $139 a night. Eat a late lunch or early dinner at a local Cuban favorite, David’s Cafe (305-672-8707; http://www.davidscafe.com). Cubano sandwiches and plates of pollo asado, along with black beans and fried plantains, are washed down with sugar cane and papaya juice. Within easy walking distance is Fritz’s (305-532-1954; http://www.fritzsmiamibeach.com), where you can rent bikes or rollerblades to glide on the paved boardwalk that lines the beach from 21st to 5th streets. Bike through the heart of the Art Deco district as you smell the salty air of the ocean. Lock up and have a dip wherever you please. That night, head to the sleekly designed Mansion (305-695-8411; http://www.mansionmiami.com) to get a firsthand look at why South Beach is one of the top places in the country to go clubbing. With a huge dance floor and five bars, you’ll have more than enough room.

Saturday: Order the lox, eggs, and onions at Jerry’s Famous Deli (305-532-8030; http://www.jerrysfamousdeli.com). After breakfast, ask them to make you a sandwich to go. And be sure to pack lots of water. Drive west on the Tamiami Trail (Highway 41), and less than an hour later (still technically in Miami), you’ll reach the Shark Valley Visitor Center (305-221-8776; http://www.nps.gov/ever/planyourvisit/svdirections.htm), at the northern edge of Everglades National Park. Rent bikes and get ready for one of the most exhilarating 15-mile loops of your life. (If you don’t want to bike, a tram follows the same loop.) More than likely, it will take you an hour to bike that first mile. That’s because you’ll want to stop every 20 yards to get another photograph of an alligator sleeping in the tall grass (wary of humans, they’re far more content to sleep than to attack visitors, as long you keep your distance). You’ll also spot large turtles sunbathing on rocks and an extraordinary number of birds that call the canal next to the bike trail home. For dinner that evening, head to a less congested part of South Beach, Sunset Harbor, where you’ll find Sardinia Ristorante and Enoteca (305-531-2228; http://www.miamibranding.com/sardinia). As the name implies, all the dishes stem from this large Italian island, and, judging from the taste, are highly authentic. Most of the pastas are made in-house daily and are topped with tantalizing sauces.

Sunday: Have breakfast outdoors at the Front Porch Cafe (305-531-8300; http://www.frontporchoceandrive.com) on Ocean Drive. Then it’s on to Fairchild Tropical Botanic Garden (305-667-1651; http://www.fairchildgarden.org) in Coral Gables. This lush oasis is a mix of ponds, palms, ferns, and whimsical sculpture, like Dale Chihuly’s colorful works of glass that blend in with the orchids and ferns in the conservatory. Get a map of the 83-acre property and hit one of the serpentine trails that take you into a waterfall-laden rain forest shaded by vanilla trees, under the Spanish moss hanging from a live oak, and past the massive roots of a 70-year-old baobab tree that resembles an elephant’s head. After exploring this fecund terrain, you might never want to head back to South Beach.