They want to see the country. Is a joint road trip in their future? 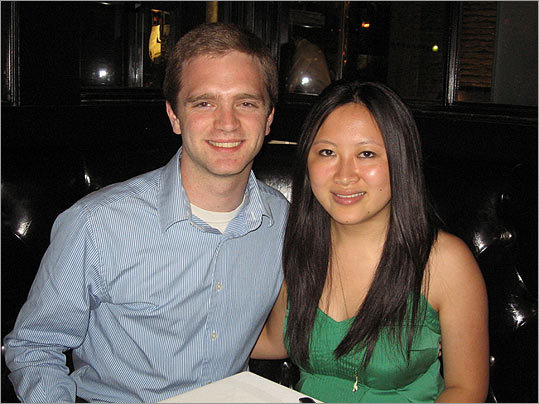 Says he’s a catch because: He’s young, sexy, and motivated.

His perfect Saturday includes: A round of golf, making love in the afternoon, and hosting a party at night

Her interests include: Traveling, sky-diving, scuba diving, and plans to climb Mount Kilimanjaro this summer

Her perfect man: Ashton Kutcher as a marine biologist

On the Clock Steve: I was about two hours early, so I relaxed in nearby Peters Park doing a crossword puzzle and watching kids play basketball and baseball.

Anita: He gets out of work at 4 and apparently just wandered around the area. I felt a little bad. I came straight from work, so I didn’t have a lot of time to prepare – I had to change at work.

Steve: Anita wore a nice green dress, which was appropriate, as I was in work clothes. My first impression was: “I’m glad the Globe set me up with someone attractive.”

Anita: I thought he seemed nice and was cute, if not necessarily my type.

Small World Steve: Anita will soon be spending several months in Africa. I was very interested in that, though I’d prefer if she’d hang around locally for a while.

Anita: I was surprised to learn that he just graduated college. I’m typically attracted to older guys. We also learned that he works with one of my friends, which we both found surprising.

Steve: We talked about some movies and bands that we have appreciated.

Anita: I really love to watch movies and he doesn’t watch them at all. He lives at home and doesn’t go out in Boston very much at all.

Steve: Both of our jobs are involved or affiliated with pharmaceutical companies.

Anita: We both really want to take a cross-country road trip and explore the States, which was really cool to discover.

Steve: Anita made me feel so comfortable because she could hold up her end of the conversation.

Anita: I felt pretty comfortable, but I could tell he was really nervous – he spilled a beer on himself at dinner!

Steve: We had a great time but weren’t falling in love with each other on the restaurant bench.

Anita: I didn’t feel any chemistry; it felt more like grabbing dinner with a friend.

Green Mania Anita: After he finished his drink, it seemed like the appropriate time to leave. I also didn’t want to make him miss too much of the - game!

Steve: Had she been truly into basketball, I would have proposed we catch the game out, but this wasn’t the case.

Anita: We hugged, and he asked for my number.

Steve: Boarding the T, I sent her a message so she would have my number, thanking her again for the wonderful night.

Steve says: A – Anita was awesome.

Second Date? Anita: Not a date, but I’d definitely be up to hanging out as friends if he wants to venture out into Boston.

Steve: I don’t often meet young women of her caliber – smart, casual, and cute. Anita – if you’re reading this, call me!

CUPID NEEDS MEN (OF ALL AGES) Go on a blind date. We’ll pick up the tab. Apply at boston.com/cupid.