THIS STORY HAS BEEN FORMATTED FOR EASY PRINTING
Your home/Green

Made in the shade

Their goal: To capitalize on the existing landscape without disrupting it. The result: An eco-friendly haven amid the trees. 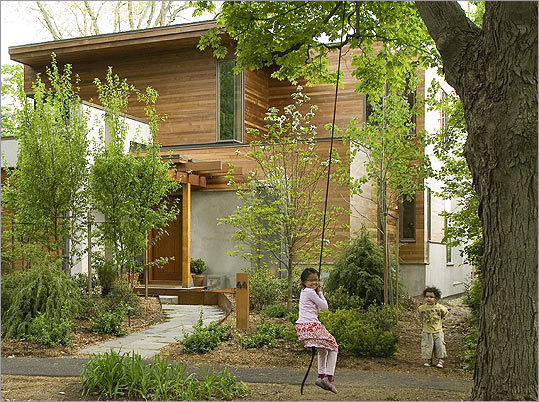 BLENDING IN The Northampton home's exterior, made of cedar and concrete, was designed to recede into the surroundings. (Photograph by David Stansbury)
By Jaci Conry June 27, 2010

In a Northampton neighborhood that’s chockablock with Victorian homes, Michael Cohen and Chia Collins’s modernist-inspired house stands apart. Yet rather than being conspicuous, the residence, with its crisp cubic massing and flat roof, is so closely knit with the setting that it virtually blends into the landscape. Exterior materials are cedar and concrete, selected to recede into the dense topography – a haven of maple, oak, hickory, and evergreens that leads to the Mill River.

“We have the best of both worlds,” says Cohen, who is 60. “We are in a wonderful, in-town location, and the street side of the house faces a great neighborhood. The back of the property, however, is all woodland. When you’re on our deck, you don’t see a neighbor in any direction. It’s completely private, almost as if we’re living in the trees.”

After residing in an antique farmhouse in Shelburne Falls for 25 years, Cohen and Collins were looking to build a drastically different style of home, one that was geometric and full of straight lines and large volumes. The couple, who have two grown sons, a 10-year-old daughter, and grandchildren, wanted an eco-friendly house that would comfortably accommodate their whole family with open, flexible spaces for entertaining. Their other requisite was that the home embrace and make the most of the environment, providing them with a strong connection to the outdoors.

In planning the house, the couple collaborated with sculptor and designer Michael Singer, who says, “The house was laid out to capitalize on the site’s incredible southern exposure,” with its vista of woods and sky. Throughout the first level’s open floor plan, south-facing window walls are framed to promote the view and privacy. The numerous windows are double-glazed with low-E glass filled with argon – in winter, they allow much of the sun’s heat to pass into the house. A concrete apron runs along the interior side of glass doors to serve as a heat sink that absorbs warmth from the sun during the day and redistributes it at night.

For maximum energy efficiency, the couple chose a geothermal heating and cooling system, which is up to four times more fuel-efficient than a conventional furnace and uses an underground pump to cool the air in summer or heat it in winter, drawing it into the house. There is also a natural ventilation system: High clerestory windows on the second level allow heat to escape in the summer. A series of glass panels inset in the second-level hallway floor filters light from the windows above through to the first floor.

As a dramatic design element, the home’s numerous steel beams were left exposed. “Some of these beams are 16 inches thick,” says Cohen. “It gives the feeling of an industrial loft, which is quite different from the typical architecture of our small town.” The heavy beams are balanced by the soft green and brown earth tones of the rough plaster walls.

While the back of the house has tremendous windows, the street side has few. “When you approach the house, you don’t know what you’re getting into,” says Singer. “Once you step into the entryway, where there are 10-foot ceilings, the eye is led immediately down the central corridor, and you walk into this ever-expanding space – ceilings increase to 13 feet and then 20 feet – that brings in these amazing views of the trees, hills, and sky beyond.”

Along with nontoxic paints (low in volatile organic compounds) and low-wattage lighting, the house features seven types of wood, including locally sawn and milled birch and mahogany certified as sustainably harvested using standards established by the Forest Stewardship Council. The bamboo kitchen cabinetry, some of it set into the 10-foot-long island to avoid obstructing views, was made by Shelburne Falls craftsman Jim Picardi. Concrete counters were designed to look like stone for an organic feel. Custom furnishings throughout emulate mid-century-modern style, including the dining table, conceived by Cohen and featuring a burnished steel base and mahogany top, and a streamlined built-in couch, designed by Singer.

Among the home’s most unusual aspects is the screened room. With three walls of screened windows and a wood-clad interior, it’s a contemplative spot with a built-in window seat. “The cantilevered room is at the same level as the trees. When you’re out there in the afternoon sun, it’s just exquisite,” says Cohen. “You really feel as though you are in a treehouse.”

Jaci Conry is a writer on Cape Cod. Send comments to magazine@globe.com.

Read more from this issue.
More Your Home: Green
Your comment is subject to the rules of our Posting Policy
This comment may appear on your public profile. Public Profile FAQ