He’s a pro athlete; she’s serious about soccer. Will their date be a win? 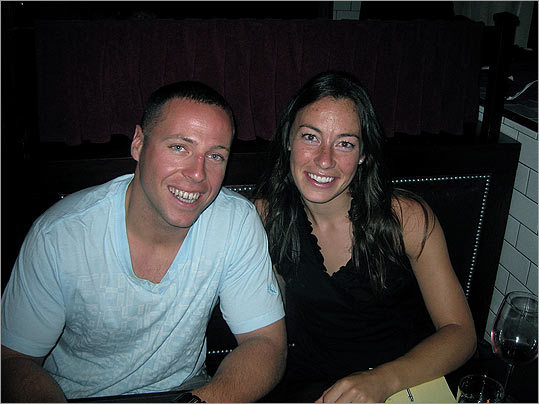 His perfect woman: The face of Halle Berry and the body of a soccer player

His perfect date: Dinner at an Italian or steak joint, followed by a comedy show

Stranded on an island, she’d want: Soccer ball, Into the Wild, and sunscreen

Says she’s a catch because: She’s outgoing, athletic, adventurous, and always up for something.

Toned Folk Sean: I was pretty comfortable going into the date, but I was a little anxious on who I was going to meet.

Liz: I was pretty calm for the situation – what was the worst that could happen?

Liz: He seemed calm – or at least he fooled me.

Sean: She was a pretty girl with an athletic body that looked very nice in her black dress.

Liz: Sean was attractive, tan, and you could tell he was in good shape.

Just for Kicks Sean: We tried to figure out how we matched up and realized athletics was a common bond. Also, it was funny that neither of us had ever gone on a blind date.

Liz: We covered the standard conversation bases with talk of family, travel, job, etc. I gave him a hard time for canceling our date the first time around.

Sean: We talked about where we were from, college, soccer, and lacrosse, along with our jobs.

Liz: He plays professional lacrosse and I play soccer year-round. We’re both from the Boston area and hang out at similar spots.

Sean: I also discovered her sister filled out her questionnaire for her – ha-ha!

Liz: I would say that both Sean and I have easygoing personalities, which made it easy to feel comfortable with one another.

Sean: I think she was a little shy off the bat and opened up as the night went on. I’m attracted to women that are a little more outgoing or assertive.

Liz: No groundbreaking epiphanies here; I was just along for the ride and enjoying the night. There was definitely an energy over the excitement and randomness of the evening.

Entourage Sean: We headed down to West End Johnnies to catch the end of the playoff game. I had a few friends over there and she lives nearby, so it was a great fit.

Liz: It was nice he was willing to introduce me to his friends, who were a good time.

Sean: After the Celtics game, I drove her back to her place. I asked for her number and gave her a hug and kiss on the cheek.

Liz: His friends were heckling us in the car, so it was entertaining and great comic relief to a possible awkward moment.

Liz says: A – good times all around

A Second Date? Sean: I would like a nightlife setting rather than a dinner date. I think both of us would be more comfortable in that setting.

Liz: Sean was cool – I think we’ll see each other again.

CUPID NEEDS MEN OF ALL AGES. Go on a blind date. We’ll pick up the tab. Apply at boston.com/cupid.