Do we really need a lieutenant governor?

Several states say no. Should Massachusetts be next? 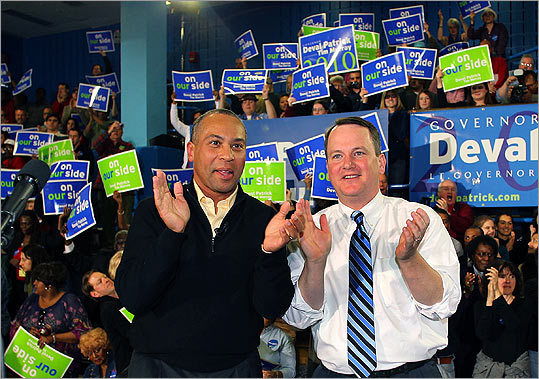 SECOND IN COMMAND Unlike his boss, Tim Murray, right, has a dearth of legally mandated responsibilities. (John Tlumacki/Globe Staff)
By Kris Frieswick June 13, 2010

Lieutenant Governor Tim Murray is a busy man. One of his days last month starts with a tour and speech at Bay Path Regional Vocational Technical High School in Charlton. Five minutes after he’s done, he’s back in his state trooper-chauffeured car to Tewksbury, where he addresses a chapter of the Retired Educators Association of Massachusetts to field some not-always-polite questions about pension reform. Then it’s to the State House to preside over a five-minute-long Governor’s Council meeting, conduct the swearing in of a new undersecretary of criminal justice, attend a briefing by the Interagency Council on Housing and Homelessness, eat a bag of peanuts for lunch, talk with a reporter, sit in on a leadership meeting with Governor Deval Patrick, Senate President Therese Murray, and House Speaker Robert DeLeo, attend a staff meeting, confer with people from a local business, then return to his hometown of Worcester for the funeral of a policeman’s father.

As we slog through yet another heated gubernatorial race and our governor slashes the state budget beyond the bone, the lack of legally mandated productive work for our lieutenant governor seems like more than just a historical oversight. Is the currently configured role of Massachusetts lieutenant governor, a position that pays $124,920 a year and has six dedicated staffers consuming a portion of the $4.6 million governor’s office budget, the most efficient use for this high-level title? Do we even need a lieutenant governor? It’s a question legislators in both Illinois and Louisiana have been weighing this year.

The lieutenant governor’s limited official role in Massachusetts is uncommon, says Hurst, and in other states a limited role is why some initiatives to abolish the position gather steam. “What gets lost in the conversation when people question the existence of the office isn’t the use of the title,” she says. “What they’re probably questioning is: Are we using the office to its maximum capacity? Is it effective and efficient in contributing on a daily basis?”

States that lack a lieutenant governor still have a succession plan, and the 20 gubernatorial successions nationwide in the past decade haven’t created any major problems, whether or not the successor was a “lieutenant governor.” Voters might dislike the person who takes the governor’s seat, but at the end of the day, there is someone sitting in it, and that is the point of succession. For instance, Arizona secretary of state Jan Brewer, a Republican, last year succeeded Governor Janet Napolitano, a Democrat, when she was named secretary of homeland security. While Brewer’s performance has come under scrutiny, the succession itself went off without a hitch.

Cases like Arizona’s, says Hurst, are the chief argument for having lieutenant governors run on the same ticket as their governors. But she doesn’t offer justification for the staggering lack of legally required duties that accompany the lieutenant governor’s title in states like Rhode Island and Massachusetts.

In Rhode Island, at least, someone is mad as hell about it. Robert J. Healey Jr. of Barrington is running for lieutenant governor with the express purpose of abolishing the role if he wins. He can’t truly abolish it – that, as in Massachusetts, requires an amendment to the state’s constitution – but he has vowed not to fill staff positions, to zero out the $948,ooo lieutenant governor’s budget, and to work to create a constitutional amendment abolishing the role. “We’re spending one million dollars a year for someone who has no official function other than to wait around for the governor to die,” says Healey, an attorney and former Rhode Island gubernatorial candidate who says he anticipates the endorsement of the state’s Republican Party. “It makes no sense to have the office. There are no other duties. No one consults that office to make sure something will be approved. Everybody in the functional part of the government thinks it’s a joke.”

So why do it that way here? When asked whether Massachusetts should expand the legally binding duties of the lieutenant governor, Patrick’s office responded with a statement that praised Murray’s initiative in taking on additional duties and his contribution to the Commonwealth, but didn’t address the question.

Not surprisingly, Murray thinks the role’s current scope is fine and says it’s a full-time job learning all the Commonwealth’s administrative knobs and levers. But if he were to quit the rubber-chicken circuit and all his committee work and were legally assigned to a job that actually needed doing, the role of lieutenant governor might then start adding some real value to the Commonwealth and its taxpayers. Given the current budget cuts, maximizing the value of every taxpayer dollar has never been more vital.

Kris Frieswick is a freelance writer in Boston. Send comments to magazine@globe.com.