Cambridge’s Mount Auburn Cemetery – the final home for famous folks like Isabella Stewart Gardner and Winslow Homer – is one of the area’s few historic graveyards still open to new customers. 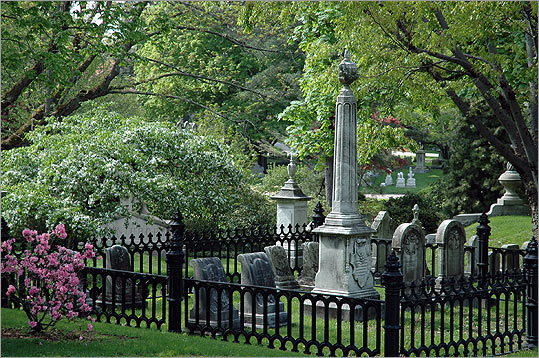 “Beautiful, timeless . . . And still available.” Those words appear in elegant crimson calligraphy on a banner beside the main entrance of historic Mount Auburn Cemetery. Facing Cambridge’s busy Mt. Auburn Street, the banner merely hints at the commodity for sale within. “It’s not as direct as I would like,” says Sean O’Regan, vice president of cemetery services. “Direct to me would be ‘Burial space still available.’ There’s no doubt there.”

After he took the job almost two years ago, O’Regan brought a more aggressive approach to Mount Auburn marketing – to mixed reviews. An ad in a Boston Symphony Orchestra program encouraged patrons to “be a permanent part of Boston culture” and touted new burial space. After the ad appeared, in November 2008, internal discussions led to a campaign with a softer sell a few months later. Recalling the initial ad, O’Regan admits, “I crossed the line.”

Like the BSO ad, the banner was designed to attract what people in the business call “pre-need” customers, those who plan for their burial. Mount Auburn, a nonprofit National Historic Landmark straddling Cambridge and Watertown, depends in large part on burial fees for building its endowment. The endowment, created a quarter century after Mount Auburn’s 1831 founding, covers grave-site maintenance in perpetuity and general cemetery upkeep. Other projects require the funding of individuals and foundations.

On any given day, the meticulously landscaped 175-acre spot attracts tourists, walkers, bird-watchers, photographers, historians, and mourners. Mount Auburn, the final home for hundreds of notable figures, pioneered the country’s so-called rural cemetery movement and inspired the establishment of public parks. Visitors typically view the cemetery as a park and historical attraction – not as an active burial ground, at least no more than they consider Faneuil Hall a modern-day government meeting place. “We’re trying to let more people know that we’re open for business, so to speak,” says Dave Barnett, Mount Auburn president and CEO. “But we don’t want to overdo it. We had a lot of debate whether to even put that banner up. We thought, ‘Oh, people are going to think it’s sacrilegious.’ But it seems to be working.”

With prices ranging from $1,600 for cremated remains placed in a columbarium, or niche, to $500,000 for premium burial spaces in the historic core, prospective clients aren’t rushing to reserve spots, especially in the current economy. But since hanging the banner in mid-2009, Mount Auburn has experienced a noticeable uptick in interest, with callers frequently mentioning the display. For people who desire historic and scenic burial space, Greater Boston offers limited options.

Boston’s famous graveyards – Granary Burying Ground, King’s Chapel, and Copp’s Hill – opened in the mid-1600s and reached capacity less than two centuries later. The original part of Sleepy Hollow Cemetery, established in 1855 in Concord, is also sold out, but Jamaica Plain’s Forest Hills Cemetery, started in 1848, remains active. “We have space available in our most historic sections,” says Cecily Miller, director of the Forest Hills Educational Trust. “You can be buried near e.e. cummings.” Still, when it comes to letting the public know what’s available, Forest Hills faces many of the same challenges as Mount Auburn.

Inside Mount Auburn, small red signs mark some of its six “active sales areas,” directing visitors to the main office for details. The new interment spaces are located along the property’s perimeter, though within easy walking distance to the historic core. The cemetery aims to maximize usable space while respecting landscaping that dates to its founding. “We’re not laying out space to generate revenue first and worry about what it looks like later,” says Barnett. “It’s the exact opposite.”

Mount Auburn spent $3 million developing the newest sales area, called Birch Gardens – with room for caskets ($19,500-$60,000) and cremated remains ($4,000-$60,000) – and hopes for revenues of $6 million. From a distance, it blends easily with the older sections of the cemetery, but Birch Gardens has a determinedly modern aesthetic: reflecting pool, blocks of grass outlined by granite, clusters of carefully chosen trees and shrubs, simple granite benches scattered throughout. And not a traditional grave marker in sight. Those buried in Birch Gardens share inscription space on one of nine granite panels along the eastern edge of the area. While the shared-monument concept keeps new tombstones from cluttering Mount Auburn and obstructing valued views, it is not easily embraced by all. Candace Currie, the cemetery’s director of planning and sustainability, says early reaction to the site from focus groups was “lukewarm.” “One person thought this is not as beautiful as Mount Auburn should be,” says Currie. “And somebody else said: ‘This is perfect. I live in an apartment in Cambridge. I love the proximity of the inscription spaces to each other.’ ” Pleased with the way Birch Gardens turned out, cemetery trustee David Straus and his wife, Patty, purchased space there. To date, 38 of 386 spaces have sold in Birch Gardens since its October 2008 opening.

Halcyon Garden, another new sales area, lies along a wood-chip path and overlooks Halcyon Lake and the famed Mary Baker Eddy monument. Caskets lie beneath the path, while names can be inscribed on nearby granite benches or monoliths. The layout and landscaping appealed to Beate Becker of Arlington. A longtime fan and frequent visitor to Mount Auburn, Becker considered holding her wedding there until the groom nixed the idea. She did, however, celebrate her daughter’s first birthday at Mount Auburn with a scavenger hunt that involved finding famous graves. Becker chose to purchase plots for herself and other family members in Halcyon Garden. Initially, prices made her hesitant. But with spaces that now range from $12,500 to $24,000, “it’s the cheapest real estate you can get in that neighborhood of Cambridge,” she reasons.

“I really loved the benches,” says Becker. “To sit and be near someone while you’re thinking about them is really perfect. . . . It was like buying a small house in a good neighborhood.” A sentiment that fits Mount Auburn, though it’s probably not banner-ready. n

Shira Springer covers sports for the Globe. E-mail her at springer@globe.com.