After a fatal crash, they want more respect on the road. They need to earn it. 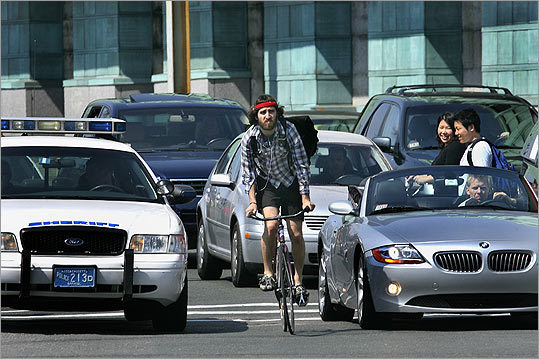 (Photograph by Wendy Maeda/Globe Staff File)
By Doug Most May 9, 2010

The game of chicken is straightforward. Two objects move toward each other until one flinches. Of course, not all objects are equal, as anyone who has ever merged uncomfortably close to an 18-wheeler on the highway knows.

That’s why this quote from a story last month about 22-year-old Eric Michael Hunt, who was killed when he and his bicycle were run over by an MBTA Route 39 bus, seems misguided, if well-intentioned: “They need to be held accountable.”

“They,” as Raymond Coderre saw it, are bus drivers. Because apparently when a 60-foot long bus collides with a 15-pound bike, the assumption is that it’s the bus driver’s responsibility, not the bike rider’s, to avoid contact. Not in my world, it’s not.

I spoke with Coderre. He’s a sensible fellow who rides between Brookline and Cambridge, where he’s a graduate student, and he insists he’s safe and respectful. He wants bus drivers to be punished if they clip a bicyclist and it’s obviously the driver’s fault. And he wants motorists to respect cyclists more. No argument here. My beef is I want cyclists to respect drivers more, too.

As Boston Police Officer James Kenneally told me, “At the end of the day, bicyclists are supposed to abide by the same set of rules as drivers.”

I bike a lot, on some bad roads – Columbia Road in Dorchester, Centre Street in Jamaica Plain, Mass. Ave. And I do stupid things on my bike. I’ve gone through red lights after looking both ways, biked the wrong way up one-way streets, biked on sidewalks.

But when I see a bus ahead, I slow and wait or ride up on the curb to get around it. And if I’m on a narrow or crowded street, I stay far right or even pull over to let it pass. What I don’t do is assume the bus driver sees me, assume he’ll wait, or assume she’ll let me pass.

When I heard about Hunt’s death, my heart went out to his family, and to the bus driver. Then I had one question, which was answered by this line in the April 9 Globe story: “Hunt, who was not wearing a helmet. . . .”

Not wearing a helmet? While cycling on Huntington Avenue, alongside trolleys, buses, cars, and those treacherous tracks?

As of this writing, no one knows for certain what caused the accident. But if cyclists want the respect they cried out for after Hunt’s death, now is the time to remind themselves of some precautions that seem obvious – but are too often ignored.

Wear a helmet. You don’t look cooler without it. It’s $50. Are you worried about hat head? Plus, and I say this as a driver, drivers will be less inclined to be angry at you if they think you actually care about safety. A helmetless rider is an arrogant rider.

Don’t wear headphones. On Comm. Ave., with its dedicated bike lane, I saw a near collision when a guy zipped through the BU Bridge intersection wearing an iPod. That’s illegal for drivers in Massachusetts. If you want to ride on the roads with cars, as Officer Kenneally said, abide by the same rules.

Buy the right clothes. Bicycling is not walking. And Mass. Ave. is not a dirt path in the country. Biking in black at any hour is dangerous. Biking in black after 5 p.m. is crazy. A neon green jacket, like the one I bought for $19, with reflectors on the arms, may not go with the pants you’re wearing, or the sandals you shouldn’t be wearing. But you’ll be the most noticeable thing on the road.

Never assume. But if you must assume, assume this: The driver doesn’t see you, that door on the parked car will swing open right now, and whoever you are meeting would rather you be five minutes late than not get there at all.

Richard Davey, the new MBTA chief, told me after the accident that all bus drivers watch a training video called “Share the Road,” which focuses on bikes. And they sit through a simulator that presents three scenarios where a bike appears in front of the driver. “Boston is a fairly aggressive place,” he says. “We could all spend a moment to be a little more safe, more mindful that other vehicles and pedestrians are on the road.”

That’s true. But this is Boston, where I see a friendly, courteous driver as often as an accurate weather forecast.

Instead, I’d heed the advice of David Watson, the head of MassBike, who declares that cyclists need to be the most visible thing on the road but still act as if nobody can see them. “Ride,” he says, “like you’re invisible.”

Doug Most is the deputy managing editor of features at the Globe. E-mail him at dmost@globe.com.