THIS STORY HAS BEEN FORMATTED FOR EASY PRINTING
The Education Issue

Part helper and part cop, parents are more stressed than ever over their kids’ workloads. 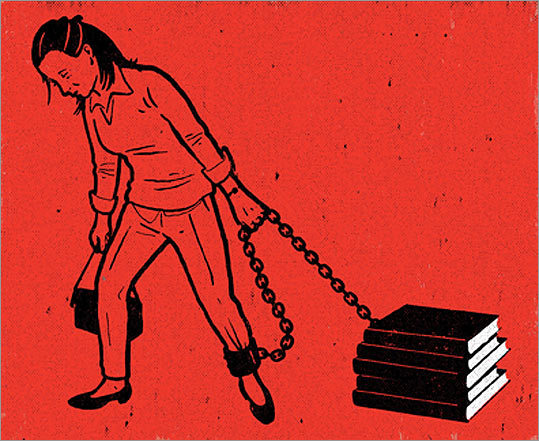 Lisa Sevajian, a North Andover realtor, finds herself extremely busy these days, despite the down market. And she gets no rest after work. In fact, she feels as if she has a second job: helping her boys with their elementary school homework. “I go to a lot of birthday parties,” she says, “and the conversation of choice is ‘Are you as stressed about this as I am?’ ” (Hint: Yes.)

In Brookline, Daphne Strassmann, a graduate assistant at Lesley University, looks forward to seeing her children in the afternoon but says she often greets her seventh-grader a bit abruptly: “The first question after I say ‘Hello’ is ‘What do you have for homework today?’ because that rules everything.”

Heather Ashton Manolian is a self-described “control freak” and the CEO of Ashton Industries, a Boxford-based firm that makes arch supports for children. For her, the pressure to ensure that her older son, a fifth-grader, not only finished his homework but also did it perfectly got so intense that she had to go “hands off,” so as not to ruin their relationship. “He was starting to resent me,” she says.

A Highlights magazine survey last year asking kids to name their “biggest problem right now” found that homework and studying for tests far outpaced every other difficulty, including dealing with bullies, money issues, or illness. The survey didn’t ask parents if homework was stressful for them, too, but the answer is pretty clear. “This sounds crazy,” says Sevajian, “but third-grade math isn’t as easy as it sounds. They have new names for triangles now.”

Difficulty answering simple math questions – or what should be simple questions – is just one of the factors contributing to what observers say is growing parental angst over homework. Educators, therapists, and the parents themselves – both of the helicopter and more grounded varieties – blame societal changes. Among the culprits are kids’ busier extracurricular schedules that reduce time for other things (never mind that the parents themselves are in large part responsible for those) and greater competition to get into college, which now starts virtually before preschool.

William R. Fitzsimmons, Harvard University’s dean of admissions and financial aid, attributes the rising parental anxiety in part to uncertain economic times and, with it, parents’ increasing eagerness for their children to get a solid education. “It’s way beyond the idea of just getting a good job. Parents are always worried about whether [their children] are happy and productive members of society,” he says, “and part of that is to develop a good work ethic, and that is reflected in homework.”

Alfie Kohn, author of The Homework Myth, points to an increase in homework in the earlier grades. “There’s been good research to show that kids 6, 7, 8 years old are getting far more homework than they did 20 years ago,” he says, “and evidence to demonstrate any benefit to having younger kids do homework is not just dubious, it’s nonexistent.”

Jeanne M. Talbot, a single mom in North Grafton, sees that rise. Her son is in second grade and has a mild reading deficit. He gets a set of assignments every night from his special education class and a weekly assignment from his second-grade teacher. He’s also expected to devote time nightly to spelling exercises, math, and reading. “When you see a list, 10 minutes this, 20 minutes of that, it doesn’t really sound like a lot,” she says, but “when you add all those things up, it’s several hours a night.”

“I really do feel strongly about a child’s need to play,” she says, “and that this is equally as important – if not more so – than homework in terms of how children learn critical skills.”

Kohn hears from many stressed parents, and who can blame them for being frustrated? “They have to become enforcers of the schools’ agenda, which they might not agree with,” he says. “They have to be the gatekeepers: ‘No, honey, you can’t do (name of activity) that gives you pleasure until your homework is done.’ They’re blamed by teachers if they don’t make sure the kids get their homework done, but they’re also blamed if they get too involved in the homework.”

So what’s a parent to do? It’s not exactly comforting, but Richard Stutman, president of the Boston Teachers Union, offers this tip: When helping out, keep your anxiety to yourself. “Generating neuroses in a child seldom works,” he says.

Beth Teitell is a regular contributor to the Globe. Send comments to magazine@globe.com.