He left the Shakers for love 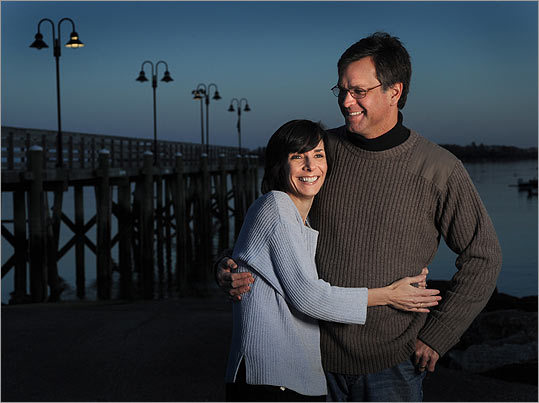 My article on the world’s last four Shakers was at first only unusual because it was a rare glimpse into daily life at the Protestant monastic sect’s idyllic hilltop village in rural southern Maine. Never could I have imagined that that story, of all stories, would become the story behind the story of how I met, and eventually married, the long-sought love of my life.

Wayne Smith was one of the Shakers I profiled, whom I initially knew as Brother Wayne. Seven months after we met, he renounced his religious vocation and vow of celibacy after 26 years at the Sabbathday Lake community to pursue our relationship. It was 2006, and he was 43. “Sometimes you just know,” he says, tapping his heart, “here.”

Others have made similar sacrifices: King Edward VIII abdicated his throne; Maria Kutschera, later von Trapp, left the abbey; and, recently, Miami priest Alberto Cutie abandoned the Catholic Church. Only . . . the English monarchy and Roman Catholicism weren’t facing extinction. As the youngest Shaker (in 2006, the other members were 49, 67, and 79), Wayne would likely have become the last Shaker, and that prospect weighed heavily on him. His sudden departure not only shocked the three remaining Shakers, but it was as if it validated the protracted, public deathwatch of the Shaker faith. (At its pre-Civil War height, the sect counted about 5,000 adherents.)

Our unlikely love story began prosaically: On my first visit to Sabbathday Lake in April 2006, Wayne and I chitchatted in the kitchen of the 1883 Dwelling House, both waiting to see Brother Arnold Hadd. I didn’t know Wayne was a Shaker; he didn’t know I was a reporter. Wayne says he was smitten immediately. I admit his 6-foot-3 frame and choirboy good looks caught my eye, but -- on assignment -- I was far more interested in the story. The Shakers had only reluctantly agreed to cooperate, needing the publicity amid a $3.7 million fund-raising campaign to protect the historic hamlet and surrounding 1,643 acres from future development. The ground rules were no probing questions about being celibate, and Hadd would speak for the group. Like Wayne, I was then in my early 40s, never married, and childless, but I had moved 16 times, lived in five states, worked at a dozen newspapers and magazines, been laid off three times, and was stuck in Maine against my will. His steadfastness was somehow exotic.

I made five more visits that spring, including one during which I attended Sunday services. Afterward, Wayne, a lifelong farmer, was tasked with showing me the Shaker Bog. He and I made the half-mile walk up, then back, my tape recorder and my mind spinning.

There are hints of my infatuation in the published story -- like my description of Wayne as a “strapping farmboy.” “If Brother Wayne weren’t a Shaker,” I told my editor, “I’d swear he was flirting with me.” She and I both laughed. After all, he was one of the most unattainable men on the planet.

After the story ran that July, Wayne purchased a cellphone surreptitiously; he wasn’t supposed to have a private phone. (Its assigned number ended in 666.) He and I began a secret, sweet ritual of talking almost nightly. Conversation was our aphrodisiac.

Wayne, who had joined the Shakers at age 17, began to realize that his religious obligations and his feelings toward me were impossible to reconcile; leaving was preferable to living a lie. “I was afraid you’d move on,” he tells me now, “if I didn’t act quickly.” (Though our relationship was the catalyst, Wayne had grown grievously disaffected and says he might someday have left the Shakers anyway.)

In August, Wayne told Hadd of his intention to depart. He says Hadd choked up and then matter-of-factly said they’d need to plan an exit strategy. Wayne was afforded a three-month grace period to extricate himself from life at Sabbathday Lake. The practical obstacles were daunting: He needed a vehicle, an apartment, and a job. The Shakers -- who consecrate their worldly goods to the sect -- gave him a 1996 F-150 truck and $9,000 with which to start his new life. Wayne got his own apartment in Portland, a two-block walk from mine, and took the job he still has as a maintenance worker at a biotechnology firm.

During the grace period, we dated discreetly, but it felt sickening, as if I were seeing a married man. He would not even kiss me in public. My heart, badly spent in the past, had its momentary doubts: Would the enchantment be broken if our love weren’t forbidden?

Once Brother Wayne became Citizen Wayne, our clandestine courtship turned startlingly ordinary. There was both relief and exhilaration. “It was like a big adventure for me, striking out in the world,” he says, laughing. “I felt like a teenage boy.”

Three months to the day that he officially became an ex-Shaker -- on Valentine’s Day 2007 -- Wayne got down on one knee and nervously proposed over a candlelit dinner in my tiny apartment, a northeaster banging at the windows. Both of us cried.

Response to our relationship was mixed. Most of those associated with the order distanced themselves from Wayne -- which stung him deeply. My friends were giddy for us, sending wry well wishes. One offered a postcard featuring tabloid photos of an extraterrestrial and his Japanese bride, scribbling on the back: Dear Chaser, If they can make it, I have faith in you and Shakerman.

Wayne and I exchanged our vows on September 27, 2008 -- a surprisingly balmy day during peak foliage -- at the Ripton Community Methodist Church off Robert Frost Highway in Vermont. It was important to Wayne that we share a faith as a couple, so before we married he converted to my religion, Methodism.

I chose the circa 1860s white-clapboarded church, with its quirky wood stove and two side aisles, because it was beautiful but unpretentious, like love. Beside the church flows the West-Running Brook, the inspiration for Frost’s meandering love poem -- a dialogue between husband and wife -- of the same name. The poem was read by a friend at our wedding.

Ours was a traditional Christian marriage service, even if our love story was anything but. Wayne looked strikingly handsome in his gray wool suit. I wore a simple white gown and sheer pink shawl and carried a bouquet of dark-eyed sunflowers, lavender roses, and pink waxflowers. After the ceremony ended -- and Wayne and I kissed -- our two dozen guests leapt from their pews and gave us a thundering, embarrassing standing ovation.

Now, sometimes, when he’s feeling particularly romantic, my husband will read “West-Running Brook” to me, his eyes tearing up and his voice always breaking at the final line: Today will be the day of what we both said.

Stacey Chase is a freelance writer in Maine. She contributes frequently to the Globe Magazine. E-mail her at storychaser@earthlink.net.