For a fallen surgeon, a higher power

Less than a decade ago, David Arndt was a rising star. He had a Harvard Medical School degree, a thriving practice as an orthopedic surgeon, and a nice place in the South End with a Saab parked outside. Then, in the summer of 2002, while performing complicated spinal surgery, Arndt walked out on his patient -- who was lying on the operating table, anesthetized and sliced open -- so he could go cash his paycheck. The incident made headlines around the world. After that came a downfall that was breathtaking in its speed and sordidness. The brilliant surgeon lost his medical license, saw a serious drug problem barrel out of control, and before long found himself facing a raft of criminal charges.

Today, home for the 49-year-old Arndt is a federal prison in Fort Dix, New Jersey. Yet, he says, “I’m a better and happier person.”

At the time I was researching my 2004 story on Arndt, he had already fallen pretty far. Yet in our interactions he sought to assert the kind of control he was used to in the OR, dressing me down as though I were his scrub nurse and giving me reading assignments as though I were his intern.

Today, Arndt comes across as a changed man. He begins our nearly 90-minute phone interview by apologizing for how he had treated me back in 2004. I tell him that’s not necessary, but he persists. Where arrogance was once his defining characteristic, he now seems fueled by an equally high-octane mixture of reflection and contrition.

He talks most easily about the raging addiction to methamphetamine, a drug he had used for some time but which eventually consumed his life. When a colleague had insisted he go for substance-abuse counseling, Arndt admits now, he smoked meth in the car before heading up to his appointment. When he walked out on patient Charles Algeri during surgery at Mount Auburn Hospital, his life was, in his word, “insane.” Yet he believed he was still in control. He says his drug addiction had put him into such financial straits that when he abandoned Algeri for the bank, “for some reason it made sense for me to do that.”

Even after he began funding his meth habit by dealing drugs, even after federal marshals arrested him outside his home, he says, “If you had asked me, ‘Do you have a drug problem?’ I would have told you, ‘Absolutely not.’ ” It would take more than a year in jail, he says, and the intercession of one man, before he began to confront the reality of the mess he had made.

Fort Dix is the sixth facility where Arndt has done time for his 10-year sentence. He may yet be transferred once more before his release, which, because of good behavior, is now scheduled for 2012. He likes his quarters in the low-security Fort Dix, where he shares a large room with 11 other inmates in a former Army barracks. But he says his most lasting interaction behind bars came relatively early on, at the Norfolk County Correctional Center in Dedham, when he met prison chaplain Rabbi Sol Goodman. As his withdrawal from methamphetamine began to lift, Arndt, who had grown up a nonreligious Jew, found himself thirsty for knowledge about ancient Jewish traditions. “It occurred to me that I’d made a shambles of my life,” he says. “It might make sense to try following someone else’s rules.”

Arndt acknowledges that inmates finding religion has become almost a cliche of prison life. But he insists his awakening is for real. And Goodman, who has learned to detect fakery and sincerity in inmates, says he found only the latter in Arndt. A Reform rabbi who has done a lot of interfaith work, Goodman saw Arndt gravitate both spiritually and intellectually and on his own accord toward Orthodox Judaism. Arndt is now an ultra-Orthodox Jew who keeps kosher, wears a beard, keeps his head covered, works to follow hundreds of commandments governing all aspects of life, and spends the bulk of the day in prayer or studying ancient Jewish texts. For someone who admits to having had “unbridled arrogance and a malignant sense of narcissism,” the rigidity of prison life combined with ultra-Orthodox Judaism appears to have been transformative. “You learn,” he says, “that it’s OK not to have to be in charge or be right or be the center of everything all the time.”

On an average day, he’ll get up at 3 a.m. and read religious texts and medical literature until morning prayer service at 7. More reading until lunch, then he’ll go for an hourlong run. The afternoon is spent reading, napping, and praying. After dinner there is evening prayer. He’s usually in bed by 9. He writes letters and uses his monthly telephone allotment of 300 minutes to try to repair the damage he inflicted on family and friends. He’s in regular contact with his sister and his son. He says his parents have been incredibly supportive. “They deserved a better son than they got.”

But will his transformation last after he gets out of prison?

Recalling that Arndt had stopped using other types of drugs at earlier points in his life only to start up again, I ask him what gives him the confidence to think his recovery will endure this time. “How am I sure? I’m not sure,” he says. “The one thing I do know is that if I use again, I’ll die.”

As to whether he wants to practice medicine again, he answers my question with one of his own: “Would any sane society like me to practice medicine again?” Arndt is allowed to petition for the reinstatement of his medical license five years after it was revoked. But in its 2005 revocation, the state medical board said it “could foresee no instance in which it would be in the public interest to reinstate [Arndt’s] license.” Even if he can’t be a doctor, Arndt says, “I’d like to be able to help people. I have a lot of payback to do.”

Arndt says it pains him to think about Charles Algeri, the patient he left on the operating table. “I can’t even imagine how abandoned and how distressed he was. Maybe I just don’t want to let myself imagine it.”

Algeri doesn’t have that luxury. When I reach him at his Waltham home and ask him about Arndt, the 53-year-old former cab driver tells me, “Every day I remember him.”

After his 35-minute bank run, Arndt had returned to complete the surgery on Algeri. But it was so badly botched that Algeri would have to undergo two more by another surgeon the following year. He’s still not right. Algeri’s right leg had been his good one, but since Arndt operated on him, he’s had no feeling from the knee down. In 2004, Arndt’s insurer paid Algeri $1.25 million, half up front, and half in an annuity. The first half went to legal fees and the purchase of his house. He now gets a monthly check for around $3,000. Last year, he began working part-time as a bus driver, but he says the excruciating pain in his back and legs makes it impossible for him to be on his feet for long.

When I tell him about Arndt’s new demeanor and contrition, Algeri is skeptical. A former addict and inmate himself, Algeri has been clean for nearly 20 years. “You get remorseful in prison,” he says, “but then the minute you get out, it’s all a memory.”

I ask him what he would tell Arndt today. “He’d be apologizing,” Algeri says. “And I’d say, ‘Fine. You feel better now? Because I don’t.’ ” 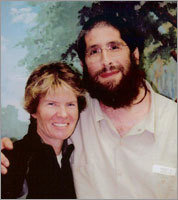 REMORSE David Arndt with close friend Dr. Betsy Watson, when she visited him in prison last year. "He wants to be a contributor to society," she says.