After a gender change, no regrets

“A Family Doctor’s Journey From Man to Woman” originally appeared on August 12, 2007; part 2, “Freeing Up Deborah,” appeared the following Sunday

On November 11, 2007, Deborah Bershel made the six-hour drive from her apartment in Somerville to a small private hospital in Montreal. In many ways, it was the final leg of a journey that had begun a year and a half earlier, when Roy Berkowitz-Shelton, a longtime family doctor in Somerville, had stunned his patients by announcing that he would soon begin living his life as a woman, as Dr. Deborah Bershel.

The summer before that Montreal trip, Deborah had been the subject of a two-part series in the Globe Magazine. I had followed her transition for the year after that bombshell announcement to the 4,000 patients of the Davis Square Family Practice. Over that time, I saw Deborah embrace her personal liberation and confront the painful adjustments it sometimes caused people around her.

She was surprised and comforted to find that her fears of a mass exodus of patients had been unfounded -- the vast majority had decided to stay on, even those who had initial discomfort. A good doctor’s a good doctor, they told me. Yet she was surprised and saddened to learn that her most fervent if somewhat improbable belief -- that her 25-year marriage and rich family life would remain intact after she began living life as a woman -- had been equally unfounded. Although she had been supportive and understanding, Roy’s wife, Alison, who also served as the practice’s office manager, had made it clear she was not interested in being married to a woman.

During the year I followed her, Deborah also had facial feminization surgery, a series of cosmetic procedures she underwent in Boston to make her look more like the woman she had always felt she was within. She struggled with the departure of the office’s two other medical practitioners, for reasons unrelated to her transition, but which brought financial uncertainty to the practice. And she met Berni Zisserson, a spunky psychiatric social worker and lesbian in her late 50s, and found in her a new love.

In a Q&A session Roy held with patients just before beginning to live life as a woman, he said, “I’m so comfortable as Deborah. In a year, I bet no one will remember me as a man.” A year after the session, that prediction seemed overly confident. But now, more than 3½ years later, and 2½ years after the Globe Magazine series was published, the statement seems more realistic.

Deborah is now 56. When I stopped by her office last month, I was immediately struck by how distant my memories seemed of her as Roy, despite the fact that his name remains on the framed medical diplomas hanging on the wall. Her hair is shorter, but more natural, than when I had last seen her two years ago. Her voice and gait have become more feminine, if not quite where she would like them to be. Most of all, she exudes a real confidence in who she is.

“When I hear the name Roy or read a reference to it, I’m aware of who Roy was,” she says. “But it feels foreign. Roy doesn’t feel real to me anymore.”

Deborah drove to Montreal in 2007 to undergo sexual reassignment surgery. She had met her surgeon, Dr. Pierre Brassard, earlier that year at First Event, an annual conference held in New England for the transgender community. As a physician, Deborah had been impressed by Brassard’s serious nature and the unvarnished description he gave of the surgery, where the penile skin is inverted to make a vagina. Although she knew many transgender people can’t afford surgery or don’t feel it’s necessary, Deborah knew it was right for her.

After undergoing the procedure in a small private hospital, Deborah spent more than a week recuperating with other transsexual patients in a converted estate home nearby. Berni had accompanied her to Montreal, staying in a local hotel so she could be there for support.

Despite the pain of the surgery, which was done under spinal anesthesia, Deborah remained upbeat. When she took her first post-op shower, she looked down at her body and felt a sense of peace wash over her. “It was a really special feeling of connection to women that I hadn’t felt beforehand,” she says.

Yet that sense of peace would ebb and flow. Back home in Somerville, she and Berni went out to see the movie Before the Devil Knows You’re Dead, starring Philip Seymour Hoffman. Deborah could barely sit through it, upset by its wanton violence. She would realize later that her amplified discomfort during the film coincided with the beginning of a bout of depression.

People who work with the transgender community say it’s not uncommon for post-op patients to undergo some sort of down period. Having suffered shame and confusion their whole lives, many individuals with gender dysphoria feel exhilaration after deciding to transition to their target gender. If they then choose to undergo surgery, there is often plenty of anticipation leading up to the procedure. So they can be forgiven for thinking these dramatic life changes will solve all their problems. There can be a letdown when old problems resurface or new ones arise.

Deborah had no regrets about having the surgery, but she struggled to understand why she was feeling so low. When she and Berni hit a difficult patch, she wondered if the problem lay with their relationship or in her personal situation. Was it a lingering reaction to the anesthesia from her surgery -- or to her low testosterone and overall fluctuation in hormones? Was it related to her feelings of attraction to males as well as females? Or was it more her delayed mourning for the end of her marriage and the tight family life she had long enjoyed with her wife and with her son and daughter, who are now in their 20s?

“I moved into the reality zone,” Deborah says. “You’re a woman, but women get stressed, women get depressed. It’s not like it solves all your issues.”

In time, the depression lifted, and things with Berni improved. Deborah and Alison, who had earlier left her job as office manager, eventually went through a mediated divorce. They sold their family home in Newton. She and Alison still occasionally see each other at social and religious events, and Deborah hopes that their current businesslike relationship will normalize over time.

“She’s a great person,” Deborah says of her ex-wife. It pains her to think of the lingering damage her transition has had on her relationship with her daughter, who is still not speaking to her, but Deborah is grateful that her relationships with her son, parents, and sister remain strong. “My parents introduce me as their daughter,” she says. “They’ve been wonderful.”

Things continue to hum along at Davis Square Family Practice. Marie Botte, the personable nurse practitioner Deborah brought on in the summer of 2007 and who helped fill in for her during her stay in Montreal, has become a dynamic part of the operation. Deborah shored up the finances of the practice in part by expanding her own workday, starting to see patients at 8 a.m.

In the Globe Magazine series, Deborah estimated that about 2 percent of her patients had left as a result of her transition. Two and a half years later, she says she wouldn’t be surprised if the departure rate was actually closer to 10 percent, as some young, healthy patients drifted away from the practice without ever explaining themselves or requesting their medical records. Still, that’s a small number. Of the more than two dozen or so patients I spoke with during my original reporting, almost all remain active patients if they haven’t moved out of the area. I had met Walter Lowry Jr., who was 50 at the time, at the Q&A session with patients that Roy had held in June 2006. At that time, Lowry wanted to be reassured of his doctor’s stability before deciding to remain a patient. When we spoke last month, he was entirely positive, saying, “I still have the same respect and admiration for her that I had when he was a male doctor.”

Deborah now has about 50 transgender patients, up from only three prior to her transition. Deborah has also become more politically active in transgender causes, testifying at the State House in 2008 in favor of an anti-discrimination bill, and traveling to Oslo last June for a global gathering of professionals involved in transgender care.

A few weeks ago, the annual First Event took place at the Peabody Marriott. Several years back, when Deborah was just beginning to summon the courage to confront who she really was, this conference was a source of information and support. This year, Deborah played that role for other transgender people just beginning their climb. She shared her life story as part of a workshop she co-presented with a trans man.

As she walked through the Marriott lobby wearing jeans, a purple top, and lavender earrings, she felt very good about herself. “I’m sad that I lost my marriage and my family is broken up to a large degree,” she says. “But I’m happy about being a woman. I’m totally happy. I have never for a moment been able to remotely imagine what it would be like to be a man again, or wish I was a man again.”

A few days after the conference, when she saw a 5-year-old patient in her office, the precocious boy told his mother, “Dr. Bershel seems like a man because of the hair.”

The mom quickly interjected: “Many women have shorter hair. Dr. Bershel is a woman. And you’re a boy who has long hair.”

Deborah laughed off the comment. But later, she reflected on it. “My sense is he picked up on something besides my hair,” she says. While the boy’s comment might have bothered her in the past, it didn’t now. “I am who I am,” she says. “And that’s really what it’s all about. Roy didn’t have to be a perfect man. Deborah shouldn’t have to be a perfect woman. Deborah just has to be happy with herself.” 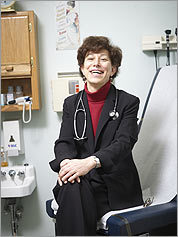 (Photograph by Christopher Churchill) The checkup Dr. Deborah Bershel has carried on her thriving Somerville practice since her transition.
Read more from this issue.