A South End couple save big -- and spend, when necessary -- on a major restoration. 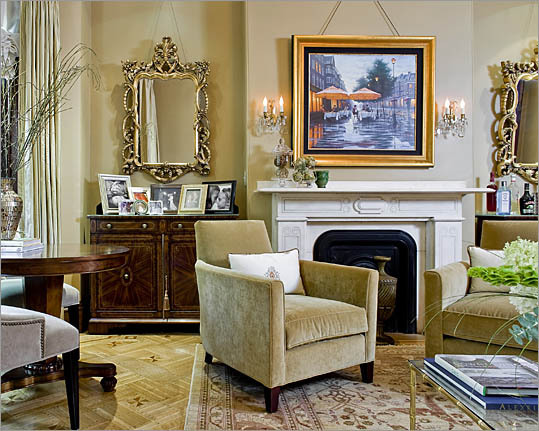 When Kim and Bill Zeoli bought their 19th-century brick row house in the South End, several renovations had taken a toll on the living room. The walnut woodwork was covered with gloppy white paint. The intricately detailed parquet floors were nearly unsalvageable from having been refinished too many times.

Yet, the couple wanted to restore the grand room’s Victorian elegance -- and do it on a budget.

They saved, for example, by stripping all of the woodwork -- from the window and door trim to the crown molding -- themselves. And Kim Zeoli’s brother painted the walls. But the couple hired a professional refinisher, John DiPonzo of Design Wood Floors in Blackstone, to restore the floors, a costly process that entailed resetting every nail.

To help with the furnishings, Duxbury interior designer Linda Merrill was brought in not only to shop with the Zeolis but also to advise them on where to invest their budget’s dollars. “We had to make some hard choices,” says Kim Zeoli. While they decided to splurge on custom-made silk drapes and an antique chandelier and sconces, they hung a 1930s carved-wood mirror bought for $49 at Elite Repeat, a secondhand furnishings store in Hanover, on the wall opposite the fireplace.

They also shopped at both high-end and low-end retail stores. The rugs came from Landry & Arcari in Boston, but for decorative vases and bowls, they went to Home Goods in Norwell. Merrill shopped for the mirrors next to the fireplace in a catalog, and -- valuable advice and a radical idea from a designer brought in to complete a project -- she didn’t try to do everything at once.

“A room can develop over time,” says Merrill. “Collecting pieces gradually can make the space feel very special.” Those catalog mirrors are a perfect example, according to Kim Zeoli. Eventually, she says, they’ll upgrade.

Jaci Conry is a writer on Cape Cod. Send comments to designing@globe.com.

There is beauty all around, as these memorable images by Boston Globe staff photographers can attest. Here, they share the stories behind their photos.