No matter what I shoot, I get a clearer picture of my own flaws

An assignment early in my career led me to a cramped apartment in a dilapidated East Boston triple-decker to photograph Cambodians recently arrived from Thai refugee camps. When I entered, I found an extended family sprawled on the floor, sleeping in what appeared to be the only clothes they had. I pictured lives filled with tragedy and void of opportunity. I made eye contact with a man and pointed to my camera, signing across the assumed language gap for permission to photograph. He nodded. In moving around to shoot, I woke a small girl, who rubbed her eyes and stared at my camera. It was a roll-film camera, much larger than a typical 35mm model. I imagined that perhaps it was the first camera she’d ever seen. Maybe she didn’t even know what photography was.

I’d been fancying myself the concerned photographer documenting the plight of those not as fortunate as myself, a knight on the white horse of journalism comforting the afflicted. But in reality I’d been patronizing the members of that family, walking in with preconceived ideas about them and glorified ideas about myself. A jet-lagged little girl had shown me my own arrogance and ignorance.

The mythology of my profession suggests that photojournalists can reveal subjects in ways most others miss. The camera is credited with the ability to probe personalities, to parse meaning from the chaos of life. Photographers often encourage these beliefs, as the myths imbue the profession with power, mystery, and, perhaps most important, romance. Photographers themselves believe the myths because that’s what we’re taught, and because they make us feel good about our jobs.

But many times pictures say more about who took them than they ever do about their subjects. I’m not sure my photographs have ever revealed much about people or places that others couldn’t understand on their own without the benefit of my work. But photography has revealed much to me about myself, and the discoveries are often painful.

Contributing images to a book project in China, I found myself wandering the dusty paths of a village on the outskirts of Beijing. In 1997, these areas weren’t heavily touristed, and it was clear that a 6-4 white guy with a camera didn’t stumble along every day. People weren’t just looking at me, they were staring with mouths open, poking each other to make sure everyone else noticed, too. I wanted them to just carry on with their lives and ignore me so I could shoot my pictures. I wanted to be a fly on the wall. Instead, I was the day’s entertainment.

I grew impatient. I wanted to shout: “Hey, I’m the photographer, you’re my subjects! You don’t stare at me. I stare at you. That’s how this works.” Then a man approached with a camera of his own. He wanted to get a shot of himself and the tall guy with the big nose. In my frustration, I started to refuse, then realized my hypocrisy. I was selfishly expecting others to allow me the openness that I wasn’t willing to share with them.

Every shoot can lead to another hard look in the mirror. An indelicate remark of mine about a GOP politician during a portrait session with Ted Kennedy -- and the senator’s graceful handling of the gaffe -- made me appreciate the virtue of simply keeping one’s mouth shut.

Joining a farming family for its daily two-hour walk just to fetch murky pond water under a punishing Ethiopian sun made me reconsider my belief that my own “hard work” had made me a success.

And documenting the life of a 17-year-old Mattapan boy as he confronted the responsibilities of fatherhood made me question if I’d have the same courage were I in his place.

Slowly, over time, all those experiences exposed a bigger flaw: Too often I chose to photograph instead of actually live. I was rigidly defining myself as an observer and missing the fulfillment of the participant. I’d often wondered why my pictures weren’t better at capturing many of those small but profound moments in people’s lives; it was because I wasn’t enjoying enough of those moments myself.

I’m still learning. Turns out, my camera can parse meaning from the chaos of life. I just didn’t realize the chaos would be my own.

Lane Turner is a Globe staff photographer. E-mail him at lturner@globe.com. 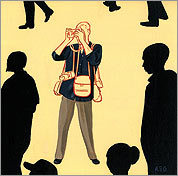 There is beauty all around, as these memorable images by Boston Globe staff photographers can attest. Here, they share the stories behind their photos.