She was a stabilizing force and a savvy adviser. And when Ted Kennedy was diagnosed with a brain tumor, she was the one who persuaded the senator to get needed rest when he’d rather be making deals on health care, sailing, or playing with his dogs.

After the senator died in August, it was Victoria Reggie Kennedy who helped the citizens of the Commonwealth to heal, personally thanking many of the thousands who turned out to mourn. For Kennedy -- Vicki, as she so quickly urges new acquaintances to call her -- there was no other option. “I was deeply moved by the outpouring of support by the people of Massachusetts,” she says in an e-mail. “So many came out to honor Teddy. I drew great strength from that, and still do.”

During a very public, very painful time, Vicki “never wilted,” says Senator John F. Kerry. “She helped Massachusetts mourn and set an example of humanity, sure, but also of toughness and character.”

And while there were those who saw Vicki, 55, as the sentimental favorite to take her husband’s Senate seat, she quickly and gracefully took herself out of consideration to succeed him. 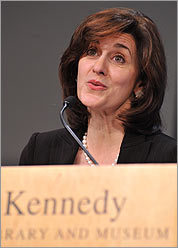