Langone had just stepped off the elevator and onto the fifth floor of the Staniford Street office building. He was standing in the main corridor, checking his cellphone, when he heard the first scream. It was coming from inside a suite occupied by the Massachusetts General Hospital Bipolar Clinic & Research Program, and the main door was propped open. That first scream was so high-pitched he thought it might be the cry of a child having a temper tantrum. Another, more urgent scream, followed by noisy commotion, made it clear this was no tantrum, no child. He headed into the clinic, charging past a receptionist’s desk, along a corridor, around a corner, and down a shorter hallway. His ears told him he was getting closer. So did the petrified expressions he saw on the faces of the people running toward him, the people running away. He witnessed one man fleeing with such adrenaline-fueled determination that the man smacked into a wall and fell down, before forcing himself back up so he could resume his sprint.

Dressed in jeans and a Patriots sweat shirt, Langone looked like just another civilian. And technically, that’s what he was. While he is classified as a Boston “special officer,” licensed by the Boston Police Department, his employer is a private security company, and his limited police powers do not extend beyond the subsidized housing complexes in Dorchester and Roxbury that he is paid to patrol. On this afternoon, he was off duty, and off his turf.

Langone had his licensed handgun with him, but as he pushed open the office door, the only thing he was flashing was his badge. There, he found a bloodied woman struggling to fight off a tall, husky man. He thought the man, 37-year-old Jay Carciero, was beating the woman, Dr. Astrid Desrosiers, a 49-year-old psychiatrist who was treating Carciero. It was only when Carciero faced him that Langone saw a knife. When Carciero lunged at him with it, Langone says, he jumped back, and Carciero returned to stabbing Desrosiers. By this point, she had collapsed onto the floor, and Carciero was on top of her. Langone says he drew his gun and ordered him to drop his knife, repeating the order several times. When he refused and continued the attack, Langone fired multiple shots, aiming, as police are trained, at the assailant’s “center mass.” He hit Carciero twice while managing to avoid the doctor.

In his first sit-down interview since the incident, Langone tells the Globe Magazine that what he relied on most during the crisis was “the ability to stay calm when everything is collapsing around you.” And that’s a skill he honed less walking the beat than standing in the boxing ring.

Paul Langone does not look like a boxer. Although the 33-year-old carries a 165-pound, 5-foot-10 frame that is just slightly heavier than his fighting weight a decade ago, his face reveals none of the scars it suffered over the years in the ring. The gash over his dark eyes has long since disappeared, the broken nose healed.

Nor does he think like a boxer. That, more than anything, may explain why he never pursued a pro career despite having won a Golden Gloves title. “I had a hard time hitting people,” he says, “because it’s unnatural.” One time, when he hadn’t seen a gym friend for a week after he had sparred with him, Langone asked around: “Where’s Danny?” Somebody told him, “You broke his rib last week.” Langone’s heart sank.

Boxing matches were easier than sparring in the gym because he usually didn’t know the other fighter personally, and because he knew that guy was there to hurt him. “Boxing makes you face the fear of the unknown,” he says, “of being hurt and being put in dangerous situations.”

After graduating from Reading High School, Langone worked in landscaping and then handled security at bars such as Ned Devine’s in Faneuil Hall. It was there, talking with the Boston police officers who worked paid details at the bar, that he spied his future in law enforcement. He graduated from an academy for reserve police officers, spent a season as a summer cop in Provincetown, and, in recent years, applied for full-time police officer positions in about a half-dozen communities. He earned a top score on the civil service exam and was a finalist for a job in Baltimore, but no offer ever came through.

For people who long to be city police officers, working as a private cop patrolling housing complexes can be tough on the ego. Teenage residents learn quickly that they can get some private security officers riled up simply by calling them “rent-a-cops.” The cowboys will overreact, the burnouts will stay in their cruisers. But Langone, according to people familiar with his work, is one of those private cops who connects well with residents and takes his job seriously without taking himself too seriously. Since October 27, though, he hasn’t been able to work at all.

These days, Langone fills his time staying in shape at the gym and going on long walks with his dog, Champ. He’s on paid leave until Suffolk County District Attorney Dan Conley’s office completes its investigation. However, Conley has said a preliminary probe indicates the shooting by Langone was justified, and “there is strong evidence that he saved the life of Dr. Desrosiers and perhaps the life of several other people.”

Desrosiers’s husband, Claude, agrees, thanking Langone publicly and privately for his courage, and his timing. “Two minutes later,” the husband told the media, “and she probably would not make it.”

Langone is reluctant to talk too much about that day, out of concern for the DA’s investigation and respect for the widow and four children of Carciero. “I’m sensitive to the family,” he says, “because they didn’t ask for this, and it wasn’t their fault.” Langone won’t say why he was in the building at the time, except to state that he was there on personal business and that he has no mental health issues.

He says he is thrilled that Desrosiers survived. But he also says that, after the shooting, as he helped administer first aid to her and Carciero, “I was hoping that he was going to make it, too.”

Carciero was pronounced dead at the hospital. “I gave him every chance I could. It was absolutely not what I wanted, but I had no choice,” Langone says. “I’m Catholic. I know I’m going to have to deal with taking another life. Still, I know what I did was right.”

As harrowing as the experience was, he remains mystified by the attention -- the hero label, the media swarming his family’s Reading home, the dating overtures flooding his Facebook account. “I did what anybody would have done,” he says.

The rest of us continue to hope that we never have to find out if that’s true.

Neil Swidey can be reached at swidey@globe.com. 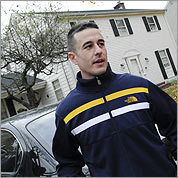