Joseph Helfgot always had a keen sense of history. The son of Auschwitz survivors, he grew up hearing about the Holocaust, an experience that instilled a deep appreciation for the gift of life. The Brookline entrepreneur and father of four had spent much of his own adult years in and out of hospitals, as doctors tried to shore up his weak heart. Finally the call came in early April that a donor heart was available. Helfgot had already designated himself an organ donor; he and his family knew that if something should go horribly wrong, someone else could receive his organs -- including his long-awaited heart.

Never did he imagine this simple decision would become historic.

Helfgot failed to wake up after surgery -- the 60-year-old had suffered irreversible brain damage. As his anguished family prepared to donate his organs, they received an unusual request: Would they also consider donating his face to a man who had been disfigured in an accident? Signing off on a heart, liver, or kidney donation can be an emotionally wrenching decision for survivors. This request, however, waded into largely uncharted territory, seeking a donation that was so uniquely personal and yet so public. But the family knew it was what Helfgot, a man who grew up dirt-poor and went on to build a leading Hollywood

market research firm, would have wanted. Their approval would be the linchpin for New England’s first face transplant and only the nation’s second.

In the months since that pivotal decision, and the transplant surgery that followed at Brigham and Women’s Hospital, Helfgot’s widow, Susan Whitman, has stepped from the shadows of her grief to champion the call for more organ donation. On average, 17 people awaiting transplants in this country die every day, according to the New England Organ Bank. More than 100,000 Americans are still waiting. If anyone understands the agony of that wait, it is Whitman. In the last four years of her husband’s life, he was placed near the top of the list and then bumped farther down, as interim surgeries improved his chances for survival. In the final four months, no surgeries could help, and all that was left was waiting. And hoping. “It is like you are on death row,” she says, “waiting for the governor’s office to call with a reprieve.”

Whitman’s goal in going public, she explains, is not just to motivate people to sign up to donate. She also hopes to spur more conversations among families. “It’s easy to sign up and say you’re an organ donor,” she says. “It’s another to have your family understand and facilitate that request. It takes strength and a will to do it.”

Whitman, 54, and her family had traveled so many peaks and valleys with Helfgot’s health, always knowing that history was not on their side. His father had died of a massive heart attack a month before Helfgot was bar mitzvahed at 13. His sister died of a heart attack four years ago.

Whitman crisscrosses the country now telling her family’s story in hopes of inspiring others to donate. And while it is too early to measure the effects, her powerful message appears to be resonating with a normally preoccupied public, says Sean Fitzpatrick, spokesman for the New England Organ Bank. “Her husband got so sick and died just when an organ was finally available,” Fitzpatrick says. “And yet, despite the fact that the system failed him, she has been so generous. And that kind of courage and optimism is really meaningful.”

Kay Lazar is a Globe health and science writer. E-mail her at lazar@globe.com. 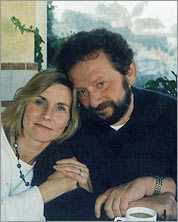