When the slender, bespectacled man stepped onto the stage of the Late Show With David Letterman this spring wearing a navy blazer, blue button-down shirt, and sensible tan slacks, he appeared to have been plucked from a sparkling Cambridge research lab rather than some dark, boozy comedy club. In fact, Joe Wong spends a lot of time in both settings. By day, he’s Xi Huang, a PhD in molecular biology who’s on the hunt for genes that can help in cancer drug development. By night, he’s Joe Wong, a Chinese immigrant who uses his outsider status to deliver laughs about the American experience.

On the comedy side, the 39-year-old Arlington resident has enjoyed a breakthrough year. Following his set on Letterman, he made two appearances on the Ellen show, which Ellen DeGeneres liked so much that she dispatched him to cover last month’s American Music Awards for her. This fall he was selected to perform at the 2010 Radio and Television Correspondents Dinner, an event that last year drew to the dais none other than President Obama. Not bad for a guy who in 2001 was a student in a stand-up comedy class in Brookline’s adult ed program and then bombed his way through his debut performance at an open mike night in a noisy Somerville bar and bowling alley.

Wong knows fame can be unforgivably fleeting for ethnic comics. That’s why you have to journey to Branson, Missouri, these days to find 1980s superstar Yakov “What a Country” Smirnoff. Wong is determined to build a lasting career by weaning himself -- and his audience -- off the more obvious material. “We live in the Obama era, with a black president, but nobody talks about that much anymore,” he says. “With ethnic humor, it should be the same. You’re Asian, you don’t have to rely on it.” What a country. 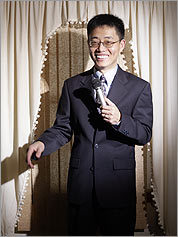