This is what you need to know about Jack Parker, the executive director of athletics at Boston University and the coach of the school’s NCAA championship hockey team. The 64-year-old is of this place, more than Bear Bryant was of Alabama when he coached football there. Parker was born in Somerville, went to high school at Catholic Memorial in West Roxbury and college at BU. He came back to coach 37 seasons ago. He has won 60 percent of his games. It seems a major university doesn’t really need a football team to be recognized as a superior institution of higher learning, and a major university doesn’t really need a football team to prove it’s a superior institution of athletic accomplishment. BU has not had a football team in 12 years. In that time, it has built a sprawling new athletic complex along Commonwealth Avenue. And, just this year, it hung from its rafters the banner representing the school’s fifth NCAA hockey championship, the first one in 13 years. The arena is named for Harry Agganis, but the program within is Jack Parker’s monument. 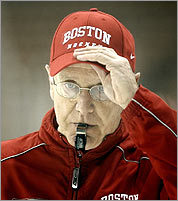