Alex Day was at Bible study inside an apartment on Haverhill Street in Lawrence. Robert Lemire was about to walk into Mano’s Pizza across the street. He was pacing the sidewalk while talking on his cellphone.

And then, on that March evening, Lemire’s eyes caught movement outside a window across the street, three stories up. Without much hesitation, he ran over, almost getting hit by a car in the process. He entered the building and started banging on doors, yelling, “There’s a baby out the window!”

Day couldn’t make out what Lemire was saying and thought the house was on fire. He ran outside, following Lemire around the side of the house, where 18-month-old Caliah Clark was dangling, her siblings losing grip. The men positioned themselves under the window, and when Clark fell, Day caught her. The impact of the catch knocked Day backward, and Lemire caught him.

Lemire, a 46-year-old remodeling contractor, and Day, a 24-year-old landscape-business owner, spoke humbly when television crews and newspaper reporters arrived. They said they just did what anyone else would have done in that situation. 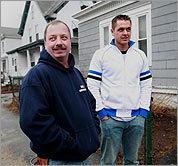