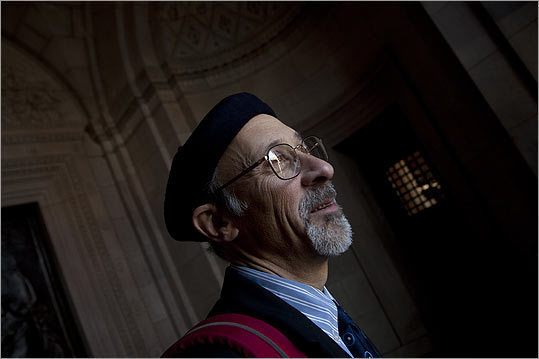 Was Poe talking about these writers when he called Bostonians “frogpondians”? I think he was. The fact that the Frog Pond was there gave him the association.

But why the frogs? Because they’re croaking. And I think when he thought about those writers, he thought that they were cause-driven in their writing. So they were constantly croaking out in defense of their causes.

So it was very derogatory.

Oh, sure. But it was playful. We think of Poe as this tragic figure. We think of him as the dark lord of nihilism and gothic despair. But as a critic, he was very clever. He was funny. He was America’s first great literary critic because he stood for principles like art for art’s sake.

After he read at the Boston Lyceum, a newspaper called his work “rich in intense twaddle.”

Poe’s quarrel with New England authors erupted into this hilarious conflict, which seemed like it was all about personal insult but actually had important underlying critical issues which went on to frame the development of American literature.

In what way? He comes out of that as someone who wants to write for the effect it has on readers.

It leads him to become a very powerful short-story writer who concentrates on shaking people up, on making them feel that they’ve been scared or amused or mystified.

Didn’t Poe, heartsick over a woman, try to commit suicide in Boston? Yes, he did. In the fall of 1848 he came to a Boston hotel; he took a dose of laudanum. He didn’t take enough to actually kill himself.

After this exhibition opens, are we going to see Poe bobbleheads for sale in Faneuil Hall? It’s not a bad idea. I sort of favor the Poe action figures.