THIS STORY HAS BEEN FORMATTED FOR EASY PRINTING
Your Home / Green

The porch, the sea, and the Energy Star appliances (OK, maybe not those) were all once part of a Maine spa owner’s recurring dream. Now they’re her real life. 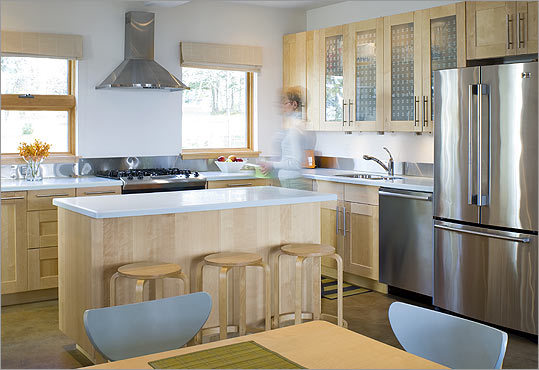 The bright kitchen's concrete floor is warmed by the sun and, in winter, by radiant heating, too. The counters are Corian and the cabinetry is from IKEA; walls are painted with Sherwin-Williams Harmony in Simply White. (Photograph by James R. Salomon)
By Marni Elyse Katz December 6, 2009

The house came to her in a dream -- really. “I was on a similar porch, looking at the water, huddled up drinking coffee,” says Rhonda Nordstrom, 53, owner of Rheal Day Spa in Rockland, Maine, describing a recurring dream she remembers having in her 30s. “The house was small, with an open floor plan.” Twenty years later, she lives in that house.

Rhonda and her husband, Bob Nordstrom, 59, an engineer, discovered the site of their future home in the summer of 1997. The couple, who were hoping to relocate from Worcester, were out for a Sunday drive during a visit to see Rhonda’s family when they stumbled upon a tiny water-view summer home on the coast near Rockland. After looking at some other cottages, they knew this was the place. They bought the property and seven years later hired architect Carrie Shores, now principal of Larson Shores Architects in Oakland, California, to realize Rhonda’s dream.

Shores, who cofounded Build Green Maine, an organization that promotes sustainable practices, was the perfect choice, says Rhonda. “She was just starting out and we were on a tight budget, so it was a good match.” Not to mention that both parties cared deeply about environmental issues. “We wanted the house to be as green as possible within our budget,” Rhonda says.

One of the most eco-friendly aspects of the new house (the original cottage was taken down), which sits on two-10ths of an acre, is its small size. At just 1,440 square feet, the cottage and its every aspect, from siting and layout to systems like heating and plumbing, are planned for maximum energy efficiency. In building a new home, the Nordstroms wanted to make as little impact on the environment as possible. They cut down no trees, and although much grading and excavation were necessary to create a new septic system and a deeper well for potable water, they maintained most of the existing landscape, including a charming hollow by a spruce tree in the backyard. The grading even improved the view for their neighbors, who can now see the water from their dining room, and for passersby. “There are a lot of summer rental properties here. When people go for walks, they always stop and look at our view,” says Rhonda. “I didn’t want to take that away from them.”

In siting the house, Shores took advantage of the cooling breezes that come off the water, putting lots of windows and doors (all are high-efficiency glass) on both the front and back of the house. Ceiling fans on the upper level add ventilation. In addition, Shores analyzed the angles of the sun throughout the year to determine the size of the porch and roof overhangs. “The sun is lower in the winter, so rays can sneak in below the overhang,” she says. “The higher summer sun doesn’t make it past the overhang.” You enter the home, a square, at one corner, and the flow is on the diagonal -- the longest dimension -- which helps to make the small space feel bigger.

The house sits on a concrete slab and has no basement. Rather than cover the slab with wood flooring, Shores incorporated the concrete into the home’s sleek aesthetic as well as its energy-use plan. “During the day, the concrete absorbs the heat from the sun and stores it, then releases it at night,” she says. In the winter, “Rhonda doesn’t have to use the heat very often.”

“We spend so little on fuel,” Rhonda says. “I keep thinking there’s got to be another, larger bill coming.” The furnace is a high-efficiency propane model, and the heat is distributed through radiant flooring. The wood-burning fireplace in the living room, built 2 feet off the floor to give it a modern look, is used at least three nights a week in winter.

On either side of the fireplace wall, which is painted a herbaceous hue ( eco-friendly Harmony paint in Sassy Green), are window seats with storage built in beneath. The seats’ cushions are a favorite place for the Nordstroms’ dog, Madison, to take advantage of plenty of solar heat, and where the grandchildren like to camp out and read when they visit.

For her and her husband, living green is not just the right thing to do, but a way of life, says Rhonda. The home and her spa (also designed by Shores) are “a reflection of who I am and what I want to be.”