The race that snores

Could the campaign to fill our Senate seat be less exciting? 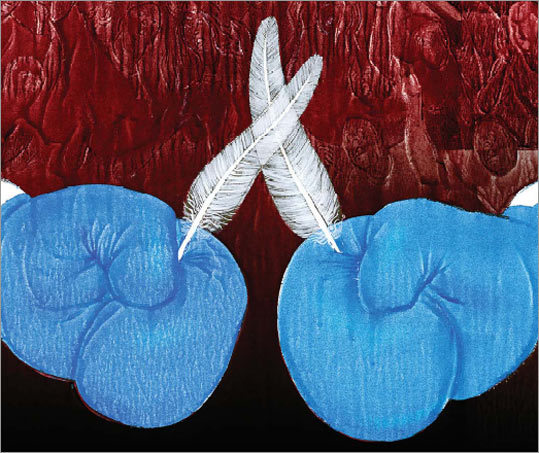 Personally, I may never get over the absence of Marty Meehan’s “war chest.”

This year’s special election to replace the late Senator Edward Kennedy lacks many things -- time, charisma, an apparent point -- but what it lacks most obviously is the incredible pile of cash that the former congressman is sitting on up there in Lowell. The man has about $5 million that he won’t spend on his own campaign and that he can’t spend on anyone else’s. I don’t understand this at all. If it were me, and I were sitting on five million bucks in my “war chest,” I would immediately apply it to my next campaign.

What has become of the Commonwealth? This election should be a complete and utter blood bath. Look at our great senatorial elections of the past. In fact, just look at the ones involving Kennedys. In 1952, when John F. Kennedy took on Henry Cabot Lodge Jr., there were whispers the Kennedy people arranged to purchase the endorsement of the then-influential Boston Post from its publisher, a dipsomaniacal crazy person named John Fox. Without that transaction, there is no Senator John Kennedy, probably no President John Kennedy, and, therefore, likely no Senator Edward Kennedy. Instead, after his brother got elected president, the younger Kennedy ran for the Senate in 1962. During that campaign, one of his opponents pointed out (correctly) that if his name were Edward Moore and not Edward Moore Kennedy, his candidacy would be a joke. And there even was considerable vigor decades later when Ted Kennedy beat back simultaneous challenges from both Mitt Romney’s hair and his chin.

Thim, as Mr. Dooley pointed out a hundred years or so ago, was the days. Anyway, our senatorial seats historically have demanded robust, entertaining cannibalism on the part of the Democratic Party. In 2004, when it looked like John Kerry might be president, you couldn’t swing a dead cat without hitting someone working for somebody who was trying to replace him.

Here we are now, entertain us.

Instead, we get earnest. We get decent. We get civil, for the love of God. Here is Martha Coakley, dedicated to a fault and running out the clock from the second she announced her candidacy, and Mike Capuano, son of the streets. Even the renegades are respectable; Steve Pagliuca made the deeply existential decision to waste his own money on himself, and Alan Khazei is the kind of public-spirited citizen any state would be proud to call its senator, except that he has less of a chance to win than Pagliuca does and has less money than anyone else. (We do not mention the Republicans in this context for the same reasons we do not discuss passenger pigeons.) I have no doubt that all of these people could do a fairly fine job at being the junior senator from Massachusetts from now until we colonize Mars. But they ought to have to go through some little hell to get there.

The biggest problem, of course, is that nobody in the field is risking anything. The one thing guaranteed to put a charge into a campaign is to have at least one or, at best, two

candidates for whom a loss means a return to the private sector. A future without a salary, staff, and a car? The realization that MSNBC gave your spot in the Green Room away, probably to Wendy Murphy or Doris Kearns Goodwin? Now those are stakes serious enough to put the fire in any candidate’s eyes and the poison in any candidate’s commercials.

However, the circumstances by which Kennedy’s seat came open guaranteed that everyone would play this hand with house money. If she loses, Coakley goes back to chasing City Hall e-mails. Capuano goes back to being a member of the House. (At least three of his colleagues in the delegation probably won’t even notice he’s been away.) Khazei goes back to doing the good works he’s always done. And Pagliuca can go back to working full time on lining up the duck boats for next June’s Celtics victory parade. It will be like it all never happened.

In fact, it’s like that now. Recently, there were signs that things could still turn pleasantly lycanthropic in the homestretch. But even that may be too little, too late. And, anyway,

I guarantee you that by next July nobody will even remember this campaign, and whoever wins, it will seem as though that person has been in the Senate since 1858. And Marty Meehan will still be in Lowell, with his $5 million and no place to spend it. And he doesn’t even have my number. Pity, really.

Charles P. Pierce is a staff writer for the Globe Magazine. E-mail him at cpierce@globe.com.