To help my son make the most of his childhood, I needed to get past one obstacle: my own. 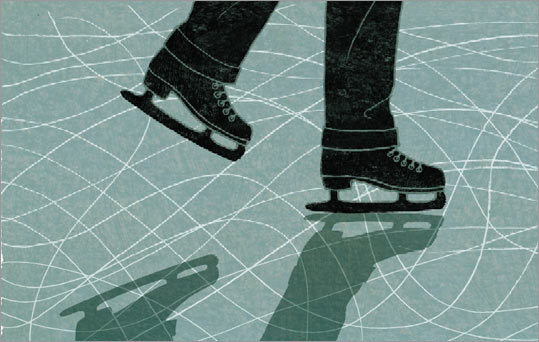 My son and I pulled on our nylon hose under the harsh glare of the overhead fluorescents. Although it was still summer, the temperature of the dressing area, like the rest of the arena, had been set to near freezing. It took more than a few minutes to adjust.

Around us moved a phalanx of pink and sparkles -- arms stretching through pink spandex leotards, pulling up pink tights dotted with glitter, adjusting pink hair bands and gauzy pink and white accessories. One or two other boys were also getting ready, but most of the boys were already out on the rink, a sweaty tangle of blue and black uniforms engaged in a raucous game of hockey.

We were there because my son, newly 6, had been invited to a number of birthday ice skating parties where he was the only one who couldn’t skate. I couldn’t either, which had reduced him to depending on other parents to pull and push him around the ice. It was the epitome of the fear I felt when the ultrasound revealed years earlier that we were to have a son -- the fear that I would fail him, and now there I was at those birthday parties, living out my prediction. I had apparently passed down the DNA for blinking when the ball was thrown toward the bat, for hanging back when the other boys scaled fences and ran across dirt lots, for demurring at games of pick-up basketball, and, yes, for failing to take to the ice.

It was 2007, and times had progressed enough that my son didn’t get called everything from “sissy” to “girl,” as I had. We also lived in a more affluent community than the one where I had grown up, which ratchets down insistence on a male’s stereotypical maleness. Still, I anticipated his gradual remove to the social fringes, and I wanted to do everything in my power to help him avoid the fate of my own childhood.

Thus, my decision to give him ice skating lessons. He accepted his lot with valor if without enthusiasm, which is better than I would have done. I would have whined and cried and fussed until my father relented.

The lesson started each Saturday morning right after the boys’ league hockey games. It was a 25-minute ride from our home, in Hingham, to the rink, in Kingston. My son’s first day, he lagged behind the others and had to be coaxed back onto the ice by me after about 20 minutes, when he separated from the group to tell me he didn’t want to continue. After the lesson, the instructors told me he should start on figure skates rather than the hockey skates I had bought him because they’re easier to learn in. When I looked doubtful, they assured me that a lot of pro hockey players started on figure skates. I gave in. What choice did I have?

The next week, and for a couple of weeks after, he skated better but without any gusto or pleasure in his own progress. I asked him whether it would help if I took lessons, too. I had been trying during his lessons to imagine myself skating for the first time -- experiencing a first fall on the hard, cold ice, the stares of the children and their parents, the awkwardness of something so literally un-sure-footed. That is, I was forcing myself to gather courage. I felt it was only fair, given that I was asking him to make his way across a slippery expanse that I myself had never attempted.

He said yes to my offer, and after a couple of weeks of procrastinating for fear of breaking my neck, I was out on the glassy surface in figure skates of my own, the only adult in a sea of children -- mostly girls, as boys seemed to have learned from their fathers on frozen ponds before making their way onto local peewee hockey teams. I wore hose, as my son did. The man at the store where we bought the skates said cotton and wool socks “sweat wrong” in figure skates and that we might as well buy cheap nylon knee-highs -- 10 pairs to a box -- rather than spring for nylon socks that were just going to get lost or ripped anyway.

At first it was all I could do to keep from falling, but within a few weeks, I was making my way around the rink. I didn’t look smooth, and many of the parents were not particularly comfortable with a bearded middle-aged man sharing the ice with their children. But as much as I could feel the heat rise to my face with every turn back toward the bleachers, I willed myself to keep going. This was about my son and me and something that needed to be set right before it went altogether wrong.

During free time, after each lesson, we skated over the slippery, trackless ice together, charting a new path. My son was actually smiling -- he loved that he was further along than I was -- and I told myself that when the lessons were over, we would go skating together on Boston Common’s Frog Pond. My son wasn’t going to become a hockey player just because, at the age of 49, I had decided to don a pair of skates. But we’d be able to hold our own on a rink, two guys disappearing into a crowd, not drawing any unfavorable attention. That, I guess despite the now-pleased look on his face, was the most I was looking for -- for my son not to draw unfavorable attention. To my discredit, my old shame was limiting my expectations for the very person for whom I wished more than anything a life without constraint.

But it was a moot point. The Currier and Ives ending to our skating lessons that I envisioned -- a tame glide on an iced-over pond surrounded by trees in the country’s oldest public park -- wasn’t to be.

One Sunday, when we had nearly finished our series of lessons and it was now winter outdoors as well as indoors, my son wanted to take a drive to the next town over from ours, Cohasset. He liked what passed for bustle in the tiny town center, the way the train from Boston went around a sharp bend as it came through the village, the rock garden outside the bed-and-breakfast with a trickle of a waterfall that froze in the cold. He also liked walking over to the little pond on the town common, where bright orange goldfish often flashed their scales in warm weather.

This particular day, when we reached the pond, a boy from his school happened to be there and called out to him. The pond had frozen solid, and a lot of kids were skating, some with hockey sticks and pucks. Others were just sliding around in their sneakers. His schoolmate wanted him to come out and slide with him. Hesitant but game, my son did, and the two of them had a great time.

Then the boy had to leave, and my son insisted that he and I walk around the ice together. Afterward, he asked if we could drive home and get his skates. The timing couldn’t have been worse. It was already late afternoon, and I had to explain to him that by the time we went home and came back, it would be too dark for skating. Disappointed, he wandered around the common for a while, petting dogs, marveling at a tall spruce that had been decorated with lights for Christmas, watching some boys play football. Then he alighted on a couple of hockey sticks and a puck that someone had left on the grass next to the pond. He grabbed one of the sticks and the puck, made his way over some slush onto the ice, and started batting the puck around. I picked up the other stick and began playing with him.

He soon asked me, half annoyed, half hopeful, why I hadn’t yet bought him a hockey stick of his own. I crammed my unfathomable delight into a secret spot so the moment would remain his rather than become mine, and told him as neutrally as I could that I was sorry and that we’d go together and get him one. Not long after, the sky darkened to the point that we could barely see the puck. We continued to play, anyway, and the sun circled farther and farther downward until finally falling below the horizon. A new story, one with a much different arc, had begun.

Larry Lindner is working on Flora and Henry, a memoir. Send comments to magazine@globe.com.