Housekeeping - and hygiene - on the cutting edge.

Advanced household technology once meant owning a garbage disposal and a frost-free refrigerator. Today we’ve got stoves that cook with magnetism instead of heat, vacuum cleaners with built-in ray guns, and washing machines that decide for themselves how to launder your clothes. With appliances like these, who needs video games?

Fancy Frying Imagine paying $2,000 for a stove that won’t get hot. The stove top of Samsung’s FTQ307 Induction Range doesn’t generate warmth. Instead, it puts out an oscillating magnetic field that will heat metal pots and pans faster than traditional gas or electric stoves. It’s safe -- the power won’t flow unless there’s a pan sitting on the burner -- and more energy-efficient than standard stoves. The Samsung also boasts a convection oven with a built-in steam cleaning system.

Smart Cycle Thanks to digital technology and clever software, the WM2701HV automatic washer from LG Electronics rocks. Really. Program the $1,200 machine for delicate items, and the front-loading washer gently sloshes the clothes back and forth instead of tumbling them end-over-end. When set for heavy-duty cleaning, the drum rotates in 180-degree steps that slap the clothes against the bottom of the tub. The machine weighs each load and calculates the optimum amounts of water and detergent. Use too much detergent, and it extends the rinse; use too little, and it will wash the load more vigorously. Or you can use no detergent at all, and just freshen up lightly worn clothes with the steam cycle.

Super Throne You’d better sit down for this one: There’s a toilet with a remote control. Well, not exactly a toilet. It’s called a bidet, and this one sprays you with water and air as a substitute for toilet paper. Bidets are more common elsewhere in the world, whereas we Americans just keep squeezing the Charmin. But given our love of gadgets, maybe the [ 3 ] Coco 6035R Bidet from Bio Life Technologies LLC could catch on. This $600 device substitutes for a standard toilet seat. It uses electricity to heat the seat, the water, and the puff of air. Many electronic bidets have controls alongside the seat. But with its hand-held remote, using the Coco is as easy as changing channels.

Who Needs a Watchdog? Having stuffed your home with costly digital gadgets, you might want to keep an eye on them with a smart phone and a home security system from Alarm.com (also available at frontpointsecurity.com). A typical setup costs around $600, which includes one video camera (additional cameras can be purchased separately); there’s also a $40 monthly monitoring fee. Alarm.com’s motion detectors and video camera are connected to a cellular data network and monitored by security guards at a central office. But customers can also keep tabs through their phones. Any hint of a break-in, and the subscriber gets an e-mail or text message. And customers with iPhones or BlackBerrys can actually watch live video of their property being ransacked. Look on the bright side -- they’ll probably leave the bidet.

Hiawatha Bray covers technology for the Globe. E-mail him at h_bray@globe.com. 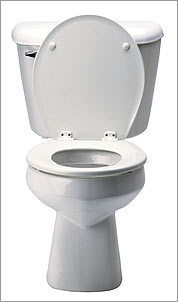 (Getty Images)
Read more from this issue.
Your comment is subject to the rules of our Posting Policy
This comment may appear on your public profile. Public Profile FAQ