THIS STORY HAS BEEN FORMATTED FOR EASY PRINTING
Personal Technology

For your ears only

When it comes to keeping your music personal, do you use cups or buds? Are you a “can” man -- with padded headphones covering your ears -- or a Newbury Street fashionista, with a flair for earbuds in snazzy prints? We tapped three local audiophiles for some personal favorites.

As a DJ and journalist at the center of the city’s experimental music scene, Susanna Bolle prefers to use studio speakers when she’s broadcasting her weekly show, Rare Frequency, on Boston College’s WZBC radio station. She has great speakers at home in Brookline, too, she says, but there she also has neighbors who aren’t always jazzed about her playlist. To keep the peace, Bolle favors her [ 1 ] SR125 headphones from Brooklyn, New York-based Grado (gradolabs.com), the latest version of which (model SR125i) retails in the $150 range. Her Grados “provide a very clean and precise sound,” Bolle says. But she notes a few downsides. For example, the headphones’ design won’t prevent some of Bolle’s music from reaching her husband’s ears. “Because they are open,” says Bolle, “they tend to leach sound out into the world.”

Bradford Krieger, an audio engineer from Allston, hasn’t got the money to match the GENELEC monitors he uses in the studios at Emerson College, where he is a student. But Krieger is thrilled about his new pair of [ 2 ] Sennheiser HD 380 Pro monitoring headphones, which he says bridge his studio work and his recreational listening. The headphones “offer a sizable fit around the ear but are collapsible and come with a [protective] carrying case,” says Krieger, who uses a bike to get around town. Krieger, who bought his pair at a Guitar Center (guitarcenter.com) for about $200, says he can now even make out the squeaking kick-drum pedals on his old Herbie Hancock Head Hunters album -- sounds he missed, even in the studio. “Those are the kinds of subtleties I need to hear,” says Krieger.

If you hit the Middle East Upstairs on a Tuesday night, you’ll probably see Allston-based DJ Eric “E-Marce” Marcelino sporting a pair of RP-DH1200 headphones, which he needs to beat-match his rec-ords amid the dance-hall chaos. On the street, Marcelino, who usually sports the earbuds that came with his iPod, admires products from the Swedish company WeSC (wesc.com). “WeSC makes a really fun, colorful line of headphones,” says Marcelino, shown here wearing his own [ 3 ] WeSC Bag Pipes ($175). You might find your pair of WeSCs, from the brilliant yellow Oboe ($50) to the square brown Alp Horn ($160), at Karmaloop (karmaloop.com/boston) on Newbury Street. 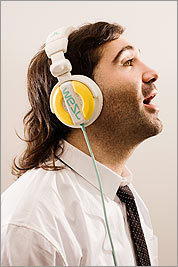 (Photograph by Matt Kalinowski) All ears DJ Eric "E-Marce" Marcelino likes what he hears in WeSC headphones.
Read more from this issue.
Your comment is subject to the rules of our Posting Policy
This comment may appear on your public profile. Public Profile FAQ