A carefully restored Victorian home gets a few shots of very modern design. 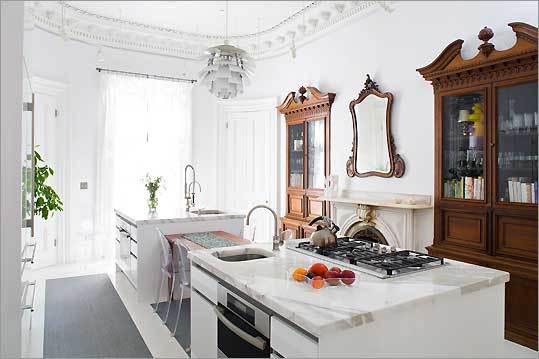 In the 19th century, the South End’s brick row houses epitomized Boston elegance and modernity. But a lot can happen over 150 years, and this one, owned by architect couple Katarina Edlund and Scott Slarsky, was in need of a makeover.

The pair knew a gem when they saw it. Already living on Massachusetts Avenue’s Chester Square, Edlund would pass the building -- then a day-care center and preschool -- and notice the historical details. When she and her husband saw a real estate agent leaving one day in 2005, they stopped him and learned that the home was indeed for sale. They bought it and began a careful restoration and renovation, stripping layers of paint off woodwork, installing new floors, recasting crown moldings, and replacing the staircase and mirrors with ones salvaged from other South End and Beacon Hill homes. DesignLAB architects, where they both work, was responsible for the project.

In the renovation process, Edlund and Slarsky managed to introduce modern design alongside the antique. In the large double parlor, now a living and dining room, they covered the walls with a paper designed in the 1950s by Australian artist Florence Broadhurst that changes color -- from white to blue to purple -- as the light moves across it during the day. Because the kitchen is round (even its doors are curved) and its walls are interrupted by a fireplace, two Federal-style built-in cabinets, and two windows, it was impossible to install a counter. Instead, two islands hold the sink, cooktop, dishwasher, and oven, making it “a really social room,” says Slarsky.

Creating a space that suits the whole family -- which includes their two young children, Olivia and Odin -- was a challenge. “You have to be inventive,” says Edlund. They didn’t like the idea of having lots of furniture in their small bedrooms, so they flanked the long downstairs hallway with a wall of closets, where everyone keeps clothes. The bedrooms stay just for beds. In the children’s shared room, divided by a curtain on a hospital track, brother and sister both have European-sized single beds, narrower than their American counterparts. When the curtain is pulled back, there’s more room to play.

Despite practical and stylistic modifications, Slarsky and Edlund make sure never to forget the house’s original grandeur. After digging through layers of drywall in the parlor, the couple discovered an ornate gold-and-cream-colored wallpaper frieze from the late 1850s. They cut it out, framed it, and hung it by their front door, a constant reminder of the historical depth of their home.

Silvia Spring is a freelance writer in Boston. Send comments to designing@globe.com. Editor’s note: Edlund and Slarsky’s home will be open to the public as part of the South End Historical Society’s House Tour on October 17. Tickets are $25 in advance at southendhistoricalsociety.org.