THIS STORY HAS BEEN FORMATTED FOR EASY PRINTING
Your Home: Color

A study in contrast

He’s colorblind. She’s not. A clever designer helped these newlyweds find a bold palette they both love. 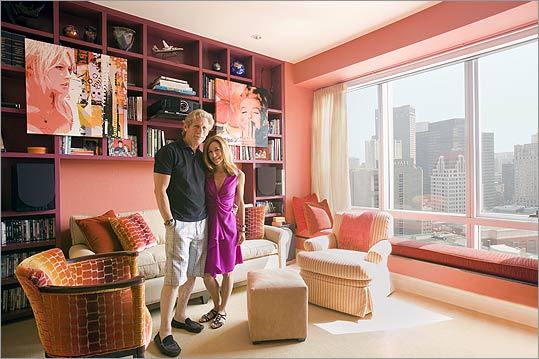 Sometimes seeing red is OK. After all, it’s the color of love as well as anger. “Red is the most salient color,” says Bevil Conway, assistant professor of neuroscience at Wellesley College. “It indicates intensity.” For newlyweds Chrissy and Mitchel Sayare, though, the choice of a bold red palette for their home was dictated more by science than emotion. Mitch is colorblind, and red is the color that his eyes can most easily distinguish.

As many projects do, the Sayares’ started out over cocktails. Chrissy and Mitch were enjoying pre-dinner drinks with Chrissy’s longtime friend Fotene Demoulas, principal of Boston-based Fotene Design, when conversation turned to decor. The Sayares were looking to spruce up the TV room/office in their 2,800-square-foot condo in The Residences at the Ritz-Carlton. Chrissy says, “The room was all white, and the rest of the place is so filled with light, so we really wanted that room to be a warm nook. Despite the size of the apartment, we spend 90 percent of our time in there. Fotene got that.”

More important, Demoulas understood the need to implement a color scheme that would look as sophisticated to Mitch, whose perception of certain colors is limited, as it would to Chrissy. Demoulas notes, “Mitch told us that he doesn’t distinguish between browns and greens well, so we stayed away from those colors.” Mitch concurs: “I wanted bold shades, because I lose paler ones to gray or brown.”

The main living space already had a dark red accent wall (though Demoulas upgraded the original painted surface with a hand-painted Venetian plaster wall covering by Studio E), teal and sapphire rugs and pillows, and pops of pink, orange, and purple from Mitch’s collection of colored glass bowls and vases. Lead designer on the project, Jill Diamandis, says of their work in the media room, “We expanded on the lively palette that was already in the home, using deeper and richer tones.”

While the rest of the home is essentially white with bold primaries, in the media room Diamandis used a scheme of highly saturated color-on-color, transforming it from a messy office with a television into a rich and inviting space for reading and watching movies. Diamandis covered the room’s walls with Donghia’s “Maestro Walls” in paprika, a paper-backed linen that provides good sound absorption. The Sayares’ state-of-the-art projection system is now tucked into a new black-lacquer cabinet from Roche-Bobois -- Diamandis had it retrofitted to hold the components.

For the existing built-in bookshelves, Diamandis pulled a deep raspberry color from two unframed canvases of Brigitte Bardot and Marilyn Monroe that the Sayares purchased in Paris during the project. Chrissy says, “Mitch loved the colors and I loved the idea of using celebrities, since it’s a media room.” The shelves’ color, Benjamin Moore’s Cranberry Cocktail in a high gloss, is an unexpected pairing with the terra-cotta walls. The effect is rich, saturated, and subtle, but Mitch can see the distinction clearly. Chrissy says that “both Mitch and I immediately gravitated to the reds and purples, but in a million years I wouldn’t have had the courage to do [the shades] on my own.” Demoulas and Diamandis “made us feel confident we could pull it off.”

Accent pillows and a side chair in a silk velvet by Clarence House feature similar gradations of color, with rows of squares that range from gold to pumpkin to red, and from pink to magenta to plum. “It’s like jewelry, the fabric is so rich and the tones so deep,” Chrissy says. The glamorous fabric also has “an animal-print” feel, says Diamandis, and was part of the design scheme from the beginning, inspired by Chrissy’s original desire to incorporate a zebra print.

Diamandis kept the floor and furniture neutral, choosing a plush sleeper sofa by Avery Boardman from Robert Allen|Beacon Hill and a jute rug from Steven King. The addition of mohair cushions to the granite-topped window seats that run throughout the condo were the finishing touch. The fabric -- John Hutton’s “Cocktails Anyone?” in a color called Bloody Mary -- not only provides a textural element, it also ties the media room’s color scheme to that of the rest of the home.

Mitch says the palette of the newly designed room has even improved their view. “You used to see the shimmering blue water of Boston Harbor out the window, but now that [the landscape] has become more urban, the view has become more monochromatic. During the day, you get an interesting composite of the cool colors of the buildings against the warm colors of the room. It’s like a painting.”